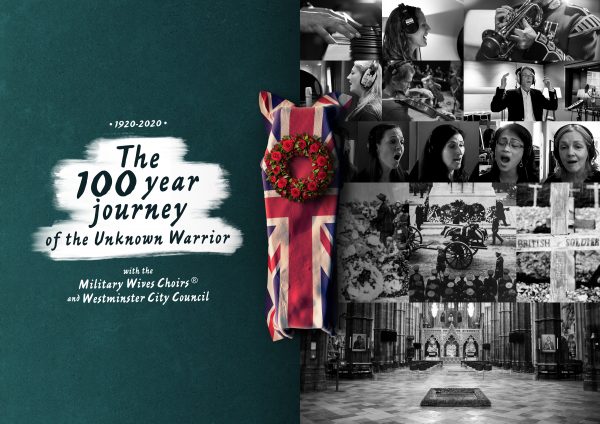 To commemorate the 100 Year Journey of the Unknown Warrior, members of the Military Wives Choirs from across the country have re-recorded a hymn sung at the funeral itself in 1920. ‘Abide with Me’ was one of two tracks to survive experimental recording at the original ceremony to become the first electrical recording ever sold to the public.

The project, which was produced during a period of present-world uncertainty, was conducted by Hilary Davan Wetton, one of Britain’s most distinguished and dynamic conductors, and produced by Sean Hargreaves. 70 members of the Choirs travelled from across the UK to record each vocal part individually due to COVID-19 restrictions.

Of over one million British and Commonwealth servicemen and women killed in World War I, some 165,000 would never receive a proper burial. Many were left in unmarked graves on the battlefields where they fell. Some were simply never found, leaving family members with nowhere to mourn their loved ones.

In 1920, one unidentified fallen serviceman was chosen at random and returned from the fields of France to represent all those who had died in the war.

And, on 11th November 1920, this unknown warrior was given a full state burial – his procession moving through packed London streets, before being laid to rest amongst Kings and Queens in Westminster Abbey. The ceremony also included the unveiling of the Cenotaph by King George V.

This national outpouring of grief followed a period of incredible suffering – and remains a moving demonstration of togetherness in the face of adversity.

“To be re-recording this single with the Military Wives Choirs during the current situation, and to be reminding people of this incredible event that brought the country together 100 years ago, makes this such a special collaboration.”

“Our choir members have come from all over the country during challenging times, to produce something that fittingly commemorates the centenary of an event that brought people together during the most difficult times this country has ever faced.”

Interesting details about the collaboration