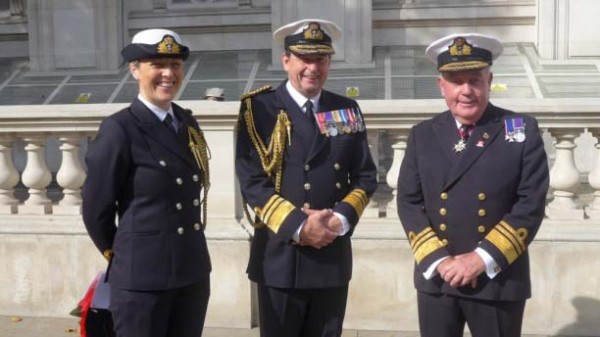 The Royal Naval Association and many sister Naval Associations mustered in Whitehall for the Biennial Parade on Sunday 10 September. I am delighted to report that 500+ members paraded with a strong turn out from the Type 42 and Ganges Associations and the Irish Naval Association. From the International Maritime Confederation we welcomed a full minibus from our Belgian friends, with Cdr Maryse Bussel leading. We had 60 standards on parade which was very pleasing, with National Standards from: the RNA; Association of WRNS; the RMA; the Merchant Navy Association, Type 42; and INA; Ganges and Belgium. We were also joined by 80 Phase 2 sailors from HMS COLLINGWOOD and HMS SULTAN.

We were led by the massed band of the Royal Naval Volunteer band service with 80 parading from many bands including Drake, Culdrose, Yeovilton and the Portsmouth establishments. As a former Volunteer band player myself (Tenor horn) – I thought they were brilliant.

40 Sea Cadets from various units, including our old friends from TS Tormentor (Netley), handed out orders of service and formed a platoon in the parade. 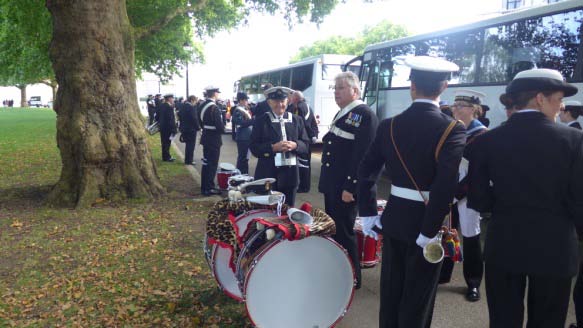 The major change this year was the much higher level of security, responding to the terrorist threats. This meant that we had to gather at King Charles Street (KCS) – a safer muster point, with drop offs from Horse Guards Road. It also meant that we carried out a ‘loop parade’ back into King Charles Street, which was very popular with attendees. The security was very tight with Whitehall fully closed from 0600 and the first UK deployment of ‘Talon’ a huge netted stinger to stop vehicles in their tracks. S/M Soapy Watson helped to accredit association members through the security barriers with the final ID question ‘What are the ingredients of a Cheesy Hammy Eggy?’ Although the amount of barriers made it difficult to get to the pub for a seaman like precaution, the understanding Met made allowances and adapted the security arrangements. 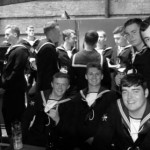 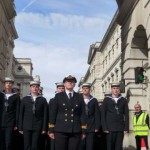 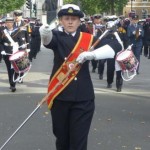 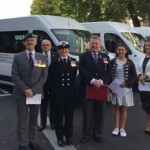 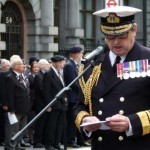 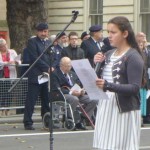 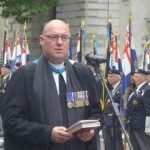 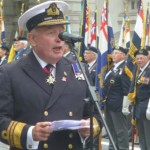 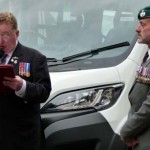 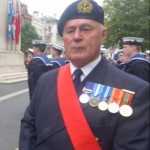 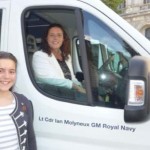 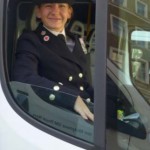 The National Ceremonial Advisor, Shipmate Mick Kieran, briefed the standard-bearers on the changed routine. The Deputy National President Shipmate Commodore Mark Slawson gave the usual pre-march briefing! The band moved off to take up position to play. Followed shortly after by the parade taking up position around the Cenotaph. Once all was squared away, the VIPs marched on. We were very lucky indeed to have Vice Admiral Jonathan Woodcock OBE,

the Second Sea Lord as the Reviewing Officer. We were joined by 3 holders of Gallantry awards for the occasion of the naming and dedication of our 3 LIBOR buses in their honour at the Service. They were Warrant Officer 1 (RSM) Matthew Tomlinson CGC, CPO Kate Middleton MC and Mrs Gillian Molyneux, wife of the late Lt Cdr Ian Molyneux GM, accompanied by her daughter, Bethany. 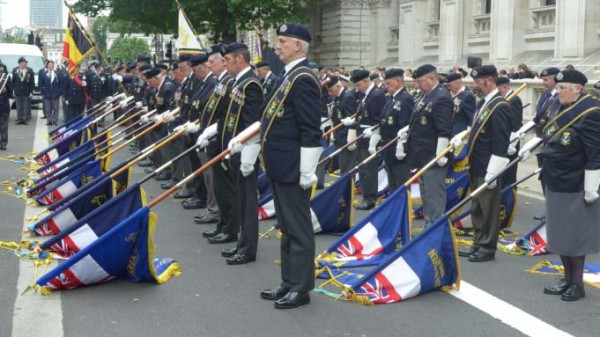 Our National President, Vice Admiral John McAnally welcomed everyone to the parade and thanked them for such a good turnout. The service of remembrance was then led by the Deputy Chaplain of the Fleet, The Rev Scott Shackleton. Our first time with Scott, who is a green-beret Chaplain and a dit-spinning war veteran. There was a chance for anyone to lay a wreath on the Cenotaph after the VIP party, and the chance to sing lustily to the usual Naval hymns, brilliantly played by the Volunteer bands. Bethany Molyneux read her poem ‘Why do you wear a poppy Beth?’ in honour of her father. All agreed that it was, by far, the most moving part of the service.

The naming and blessing of the buses was also a key part of the service. The GS read the citation for each of the gallantry awards with the recipient by the minibus named in their honour. Each citation got a wonderful round of applause.

The Second Sea Lord addressed the Parade and commented on the importance of the work of the RNA in helping digitally isolated naval veterans (Project Semaphore), mentoring Phase 1 and 2 sailors and those leaving the Navy with the Shipmates and Oppos programme. He reflected on the RN and the new carriers and the RN as a force for good in the world. He particularly mentioned the Cenotaph as a place to remember yesterday’s heroes; the gallantry award holders as today’s heroes and the trainee sailors and sea cadets as the heroes of the future. He expressed his pleasure at the recognition of Kate, Matt and Ian in this modern way by the veteran community.

The Parade Commander then arranged the Parade for the March past, band leading, with the Second Sea Lord and gallantry Award holders taking the review/salute, on the steps of the Cenotaph under the White Ensign.

The Parade looped around the Women at War Memorial and marched past the Cenotaph to return to KCS. The LIBOR buses joined the review with some shipmates enjoying the ride and the applause of the general public.

On arrival in KGS the Second Sea Lord and National President signed the new Charter and Collaboration agreement between the RN and the RNA, before the NP congratulated the parade on an excellent event.
Shipmates then took the chance to look at the buses and meet the gallantry award holders. Everyone made their way up to the Civil Service Club for chips and sandwiches and a refreshing glass of lemonade (trainees under 18) or something a tad stronger. The Second Sea Lord met lots of shipmates and trainees. We had a marvellous scrum in the Club, who did a great job in keeping the sandwiches and chips coming. Standard-bearers got their tot of course.

I cannot speak too highly of the Met Police for this parade. There was a lot of behind the scenes planning beforehand with a big effort by the Met counter-terrorist teams to keep us safe. It was such a privilege to have Kate, Matt and Gill with us (not forgetting Bethany!) – lovely, modest people who completely personify our values of Unity, Loyalty, Comradeship and Patriotism. It was also great to give Kate a lift to Portsmouth in her own bus!!

So, in summary, we had a marvellous day with very good support from across the RNA and our sister associations and IMC members – and a very kind turnout from busy VIPs (who all really enjoyed their day); the Civil Service Club did us proud and our new friends Matt, Kate, Gill and Bethany had a great day!
Paul Quinn OBE
General Secretary

Follow this link to a PDF of the report.