Woodbridge Station is a satellite of Colchester Garrison (home to most of 16 Air Assault Brigade). ‘Poppies’ is a direct result of the 2016 opening of CESSAC’s Community Cafe in Colchester, after which it was soon spotted that the equivalent at Woodbridge would benefit from a similar approach.  Poppies had been operating sporadically when suitable volunteers (or pressed men) could be found, but what it really needed was staff continuity to provide regular opening times.  The opening is the result of a lot of hard work, particularly by staff from the station, 23 Parachute Engineers and CESSAC to put all the arrangements in place.  Everyone hopes Poppies will provide a well-used facility for those Service personnel & their families in this countryside location. 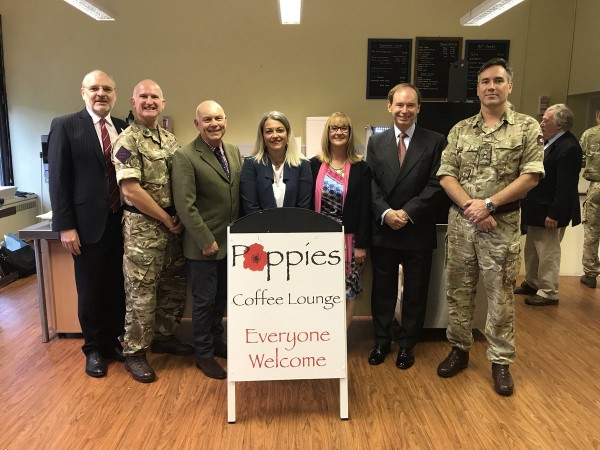 The CofE Soldiers’, Sailors’ & Airmen’s Clubs (CESSAC) was set up to provide non-denominational, non-alcoholic Clubs for serving soldiers (then sailors, later airmen too), reaching over a 100 by the end of WW1.  It has another 10 facilities across UK, Cyprus, Germany and the Falklands as well as having branched out into sheltered housing for elderly ex-Service personnel (CESSA HA (Housing Association)).  The latter owns 5 schemes in the Portsmouth area and manages 3 more (one each in Portsmouth, Saltash and Greenwich) owned by Greenwich Hospital, providing a total of 287 flats.