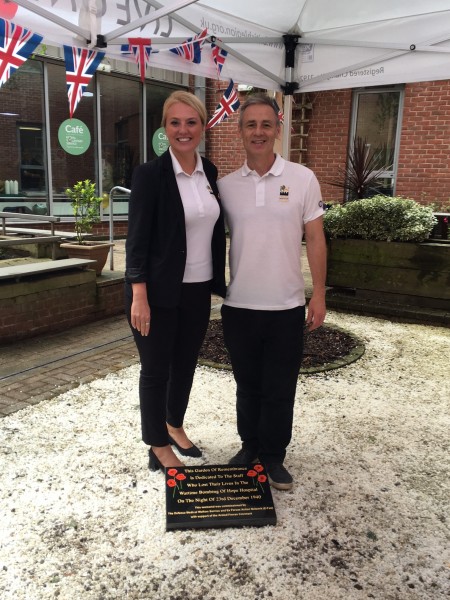 Today (27 July 2017) a new war memorial at Salford Royal was unveiled to commemorate the night that the hospital suffered fatalities during the Manchester Blitz of Christmas 1940. The Defence Medical Welfare Service (DMWS) and the Ex Forces Action Network (EFAN), had come together to replace the memorial with a new, larger one to be sited in the gardens at Ladywell Building. Despite the terrible weather the unveiling of the memorial plaque took place in a very positive atmosphere and was a wonderful ceremony celebrating commitment.

So far a small memorial plaque near the A&E Entrance commemorated six members of staff who died when a German parachute mine hit the then Hope Hospital on 23 December 1940. The plaque was in an obscure location which most people failed to see. A few months DMWS Welfare Officer at the Trust, Donna Harrison, was approached by the hospital Chaplaincy to see if she could help relocate the plaque to a more appropriate place.

Welfare Officer Donna supports ex-services personnel aged 65 and over, their families and carers. She said: “The original plaque was very small and not fit for purpose. We needed something much more appropriate and memorable. I also wanted to involve people from the community, who remembered the night, to tell their stories. I thought that this would be an ideal project to involve EFAN in and their service users. Who better than ex-service personnel? One of EFAN’s clients has been heavily involved with the final design and layout of the plaque.”

DMWS’s Isaac Smith who works for the EFAN Project said:  “Thanks to EFAN service user Richard McGillivray, an Ex Lancashire Fusilier and former Salford resident, a fitting tribute has been designed to those who lost their lives. We are proud to be associated with such a worthwhile project which commemorates the massive sacrifices made in our name so close to home. It is fitting that EFAN should be involved in this way.” 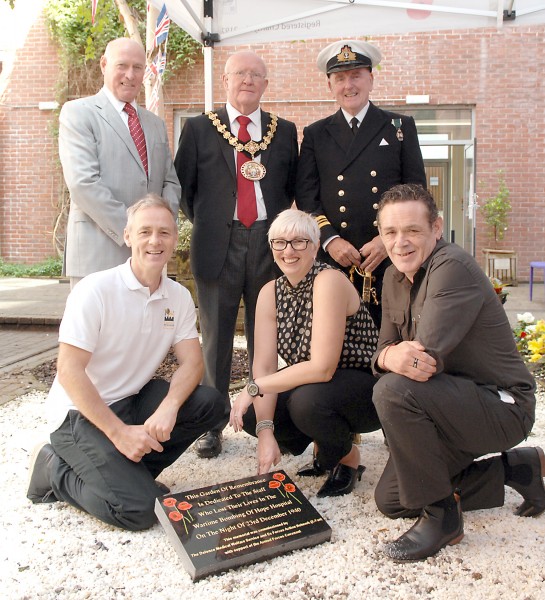 A speech by Deputy Lieutenant of Greater Manchester Lieutenant Commander Kevin Heakin, a poem reading by EFAN service user Rick and a Service of Dedication by the Trust Chaplaincy formed part of the ceremony. Cllr Peter Conner, Ceremonial Mayor of Salford and Jim Potter, Chair of Salford Royal NHS Foundation attended the event together with Hospital Staff, Veterans, other charities and locals who remember the ill-fated night.

Dr Alan Brown, the son of George Brown MB.ChB.FRCSE, a surgeon, who at the time was Deputy Medical Superintendent at the hospital shared his memory: “I can still remember the sky being bright red due to the fires caused by the German incendiary bombs which would make a frightening sound whistling as they descended and then landing with a loud explosion.”

After the administrative section of the hospital was hit, killing several staff, his father George Brown worked tirelessly for next two days operating continuously on the injured survivors. In 1960 his work during the Blitz was recognised and he received the award of the Honorary Freedom of the City of Salford.

Donna said: “The Medical Superintendent Dr J Dudgeon Giles and his wife Annie, Matron Mary Ross, were amongst those who were killed. Dr Giles had been awarded an OBE and Matron Ross a Royal Red Cross for their care of injured servicemen who were looked after at Hope in the First World War and it’s important that we honour them and their colleagues.”

CGM CRC is responsible for delivering E-FAN in partnership with the DMWS.

The Ex-Forces Action Network, delivered by Cheshire & Greater Manchester Community Rehabilitation Company (CRC), is funded by the MOD’s Covenant Grant Fund, which itself forms part of the government’s long-term commitment to supporting projects designed to help veterans under the Armed Forces Covenant – the promise from the nation that those who serve or have served are treated fairly.

Notes to editors
For further information on DMWS please contact Christine Pilbeam, Marketing and PR Manager on 01264 774 270 or email mfo@dmws.org.uk