You are here: Home / News / News / One of the Royal Navy’s most senior Admirals visits China Fleet for the Queen’s Green Canopy 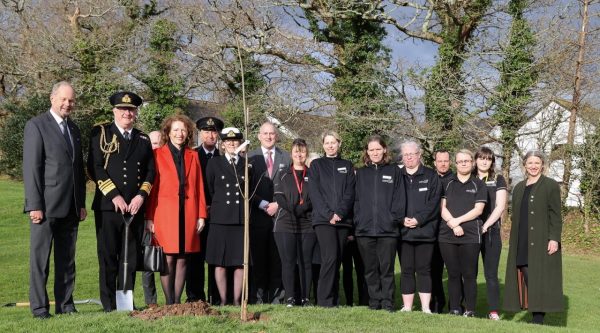 The Queen’s Green Canopy (QGC) is a unique tree planting initiative created to mark Her Majesty’s Platinum Jubilee in 2022, which invites people from across the United Kingdom to “Plant a Tree for the Jubilee”.

Everyone from individuals, groups, organisations, villages and schools are encouraged to play their part to enhance the environment by planting trees during the official planting season, throughout the Jubilee year.

With a focus on planting sustainably, the QGC encourages the planting of trees to create a legacy in honour of The Queen’s leadership of the Nation, which will benefit future generations.

“Supporting the Green Canopy initiative as a visible means of celebrating Her Majesty The Queen’s Platinum Jubilee is particularly relevant to our values. The China Fleet Trust is a significant Naval Charity which delivers through the Club leisure facilities to Royal Navy, RFA and Royal Marines personnel, and all their families. We are delighted that Vice Admiral Gardner has joined us to plant the first of the 100 trees we intend to plant as our Green Canopy.”

As well as inviting the planting of new trees, The Queen’s Green Canopy will also dedicate a network of 70 Ancient Woodlands across the United Kingdom and identify 70 Ancient Trees to celebrate Her Majesty’s 70 years of service.

“With this tree planting today, I am delighted to be supporting the China Fleet Country Club mark two great initiatives. The first is in support of the Queen’s Green Canopy to mark Her Majesty’s Platinum Jubilee, which is a wonderful project with participants linked together across the country and Commonwealth in bringing it to life. The second is in support of the Club’s own ambitions to be more sustainable and contribute to improving the biodiversity of its local environment.

“Despite the challenge of the last two years, the Club continues to serve the Naval Community and remains a firm favourite within it. It is therefore great to see it continue to grow and diversify with ideas and projects such as the ones demonstrated today.”