Peter Jackson’s Military Treasures, airing on Monday, 6pm on Forces TV and the Forces News YouTube channel, gives viewers exclusive access to the Oscar-winning Lord of the Rings director’s unrivalled collection of World War 1 planes and memorabilia – and the story of how this passion evolved. 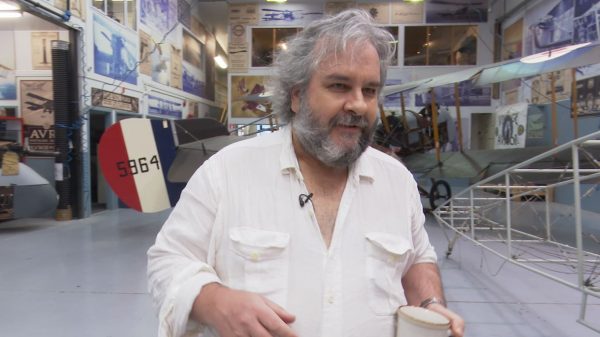 When talking about his collection Peter Jackson said:

“Because of my day job making films, I ended up with the resources of being able to do this.

“I don’t know how big it is. I keep my eye out, and if there’s something interesting, I try to buy it.

“Some people might say it’s got out of control, I’d say it’s evolved.”

Peter Jackson has the biggest collection of aircraft, uniforms, weapons and other memorabilia in the world. Some of his planes can’t be found anywhere else. Others he has re-created from scratch – using 100-year-old engineering techniques to rebuild them piece by piece using the original plans.

Of his plane collection he said:

“You strap yourself into one of these planes and take off, at that point, nothing else in the world really matters. It’s like the world becomes a very simple thing.”

The programme takes the viewer to Peter Jackson’s factory in Wellington, New Zealand, where he works with his team on restoring and making his beloved WW1 aircraft.

“What I value about the planes, aircraft and collecting artefacts and things is the fact it is a hobby that is something I can do that gets my head out of the film stuff, because once you’re in a movie, you’re in it one hundred percent and it can consume you and sometimes at night-time just going and looking at some stuff or reading some books is a good escape.”

The programme uncovers the source of Peter’s lifelong interest, on the other side of the globe. His parents were both British – his father William served in the British Army, and his mother Joan worked in an aircraft factory during the second world war.

“I grew up surrounded by veterans of two world wars, so what I was, the sort of the things that I was exposed to and listened to and the conversations that happened in our house when Dad would have friends over and everything else was all geared towards the war really and so you know I just got an interest. And Dad would also buy any First World War books that would come on sale back then, and this was the 60s late 60s early 70s and there wasn’t the sort of flood of books that there are now on the First World War, there’s an onslaught of them which is great now but back then the occasional book would come out that some historian had written about the war and Dad would always grab those and bring them home, so on our book shelf at home, we didn’t have a huge number of books but there was a certain number of first world war books there that Dad had bought.”

The young Peter Jackson enjoyed making model planes. And these models became the focus of his very first foray into film.

“My parents got a super 8 movie camera to make home movies with. I would have been about 8 years old when it arrived in the house. I liked the idea of making sort of little fictional films.”

Peter enjoyed recreating mid-air dog-fights – and his famous attention to detail meant setting some of his precious model planes on fire. And this passion was cemented when he got the chance to see full-sized planes on a family holiday.

“When I was 12 my parents took me to the UK on a sort of family trip to meet all the cousins, aunties and uncles and things, so we went to Hendon RAF Museum and that was the first time I saw real First World War planes in the flesh, and I was pretty obsessed by that stage.”

Forty years later, his incredible success as a filmmaker has allowed him to realise those childhood dreams. He has built up a vast hoard of war memorabilia which is revealed by Forces News in Peter Jackson’s Military Treasures.