Pipers called on to take centre stage of centenary celebrations

Pipers across the world are being invited to compose a new piece of music to be performed at a prestigious event marking the centenary of the Royal British Legion Scotland (Legion Scotland) in September.  Massed pipes and drums will perform the winning composition as part of a Beating Retreat to be held in City Square, Dundee, as part of a year of celebrations for the Armed Forces charity. 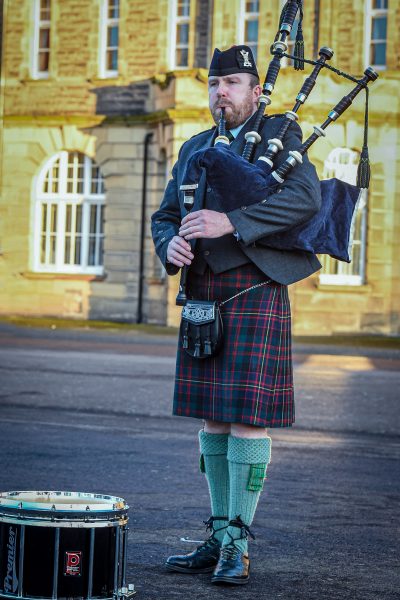 While some plans to mark 100 years of the national institution are being adjusted due to the ongoing Coronavirus restrictions, it is expected that hundreds of pipers will participate in the Beating Retreat on Friday 3 September, with the winning entry taking centre stage.

“Over the past year we have held a number of very successful virtual commemorations to mark the 75th anniversary of VE and VJ Days, and the annual remembrance period last November.  But we are excited to be finally looking ahead to coming together in person once again.

“We are delighted to have an esteemed judging panel comprised of the Senior Pipe Major for the British Army WO1 Peter Macgregor, together with Piper to the Sovereign, Pipe Major Richard Grisdale and Willie Armstrong, a Royal Navy veteran and a founding member of the Red Hot Chilli Pipers. The interest we have had from the veterans and civilian piping community to take part in the Beating Retreat has been huge, and we’re hopeful of a large number of compositions being submitted to us.”

Pipers are being asked to compose a piece in 4/4 time consisting of two parts in March time to mark Legion Scotland’s centenary.  Entries should be submitted via a video or audio recording together with a written manuscript of the composition to events@legionscotland.org.uk. The competition closes at 5pm on 14 May, with the winner announced on 4 June.  The winning composition will then be played by the massed pipes and drums as part of the RBLS100 Beating Retreat in September.

“As a veteran myself, it is an honour and privilege to be asked to judge the centenary competition.  After months of isolation is it exciting to think piping can be at the forefront of bringing people together again.  The opportunity to have your own composition performed as part of the RBLS100 Beating Retreat is a unique prize and I’m sure it will be a difficult task for us to pick a winner.”

Beating Retreat is an iconic type of military parade which dates back to the 1690s. Originally the beating of the drum was used to order troops to break off fighting and withdraw to the safety of camp as darkness fell. Later it signalled the closing of the camp gates at the end of the day and called troops back to base for the night. Today a Beating Retreat is ceremonial but a very popular element of events such as the Royal Edinburgh Military Tattoo and HM The Queen’s official birthday celebrations.