A soldier who took part in Her Majesty The Queen’s Coronation ceremony has spoken of his memories of the day, ahead of the Platinum Jubilee celebrations. 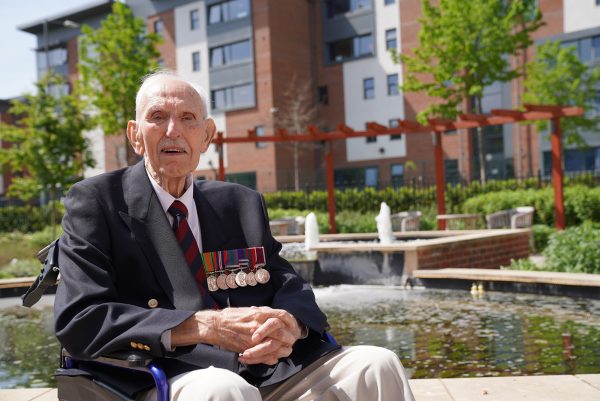 John Walmsley was one of four Grenadier Guards inside Westminster Abbey on 2 June 1953 for the Coronation of Queen Elizabeth II. He says he one of the last people that she passed as a Princess, and one of the first she walked by as Queen.

He said Her Majesty would later refer to them as “my four Grenadiers”, and that he is the last surviving member of that quartet.

John now lives in the High Wycombe Home of Royal Star & Garter, a charity which provides loving, compassionate care to veterans and their partners living with disability or dementia.

The 95-year-old, who is just one year younger than Her Majesty, stood to attention for hours during the Coronation ceremony, positioned in a recess.

“The spectacle, on that day and at that time, was unbelievable. The glitter, the pageantry, the music, it was spine-chilling.”

The historic day started with John marching the short distance from Wellington Barracks to nearby Westminster Abbey with his battalion. He said it had been raining that day, so at the Abbey the battalion formed a guard of honour under a canopy, which had been put up to protect The Queen from the elements.

From there, John and three others detached from the guard of honour and slow-marched up the aisle to the music that was playing inside. John said:

“We all moved into a recess and we stayed there until Princess Elizabeth arrived. When the procession arrived, the courtiers had to close in as the aisle was quite narrow. When she walked past, she was so close to us that we could have touched her. We couldn’t see the ceremony because we were stood in this alcove, but we could hear everything, and at least we could sense everything that was going on. And the music, my God I can’t explain it. It was spectacular, I’ll never forget that.”

While not seeing the Coronation, John vividly recalls The Queen walking past him as she left the Abbey:

“I remember Her Majesty walking past me as a Princess, and I remember her coming out as a Queen. The crown on her head and all the jewellery, and she was carrying the Sword of State and the globe (Sovereign’s Orb). It was such a fantastic sight.”

As she departed the Abbey, John’s regiment presented arms to Her Majesty, and a guard of honour was formed up after she left in the royal carriage. They then marched back to their barracks with the regimental band, before celebrating the Coronation in the sergeants’ mess.

“I feel proud to have been part of that historic day,” John added. “It was an honour to go down the aisle, see the arrangement around you, to hear the music, it was unbelievable. It was something you can’t really explain until you’re in it. It’s something I’ll never forget.”

Many years later, John joined The Queen’s Bodyguard of the Yeoman of the Guard, a ceremonial position that he served in from 1980 to 1997. This saw him take part in the State Openings of Parliament, and accompany Her Majesty to Maundy Services. During this period, he attended a Buckingham Palace garden party with his wife Glenys. John said:

“She went over to The Queen and told her that one of ‘her four Grenadiers’ who attended her Coronation was standing over there. The Queen took the time to come over and speak to me. I couldn’t believe it.”

John joined the Grenadier Guards in 1944, and served until 1967, rising to the rank of Regimental Quartermaster Sergeant. He served in post-war Germany, Palestine and Malaya.

Earlier this year, he shared his memories and the role he played during the funeral of King George VI, 70 years after the wartime monarch’s death.

The Queen has been Royal Star & Garter’s Patron since 1953. The charity will be holding a series of parties and events with residents at its Homes in Solihull, Surbiton and High Wycombe to celebrate the Platinum Jubilee.