One Veterans’ charity in Hawick received a welcome visit earlier this month when Prince Charles popped in for a visit. On 1 November His Royal Highness The Prince of Wales, known as the Duke of Rothesay when in Scotland, took a tour of the town. This included Sharpe’s, the café hub of FirstLight Trust open to veterans and the public alike.

“I spoke to Prince Charles, who I’d met on several occasions. He was a perfect gentleman, mingling with the veterans and others there,” says one veteran. “He spoke at length with me, even cracking a joke about one of our previous meetings, and seemed genuinely interested in the hub and the users.” 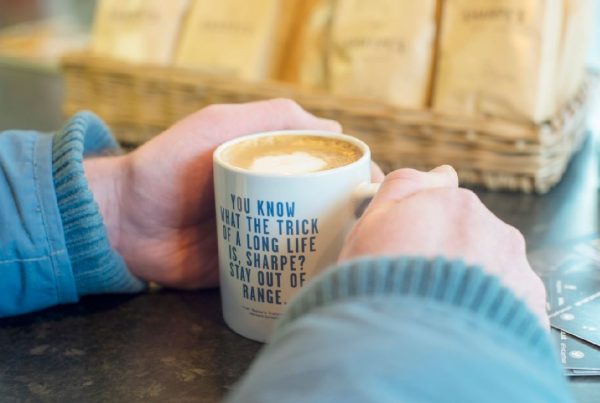 The Duke has a strong connection with the Armed Forces. While at Cambridge University he received flying instruction from the Royal Air Force. He then trained at the Royal Naval College, Dartmouth, followed by service on the guided missile destroyer HMS Norfolk and two frigates. Qualifying as a helicopter pilot, the Duke joined 845 Naval Air Squadron, which operated from the Commando carrier HMS Hermes. In 1976, the Duke of Rothesay took command of the coastal minehunter HMS Bronington for his last nine months in the Navy.

“It was such an honour for us to be visited by His Royal Highness,” adds Dorinda Wolfe Murray, the founder of FirstLight Trust. “He spoke to all the veterans who were in the cafe and to our colleagues who work so hard to create such a great atmosphere. There was lots of banter and laughter, which echoes what we encourage within the hub.  He also enjoyed some of our tea loaf. Sadly he didn’t have time for a coffee but he’s always welcome next time he comes to The Borders!”

Hawick’s FirstLight Trust cafe hub is open Monday to Saturday 9am – 5pm at 1-3 High Street Hawick TD9 9BZ and is open to veterans and the public alike. Well-behaved dogs on leads are also welcome.

More details about the work of FirstLight Trust can be found online at www.firstlighttrust.co.uk