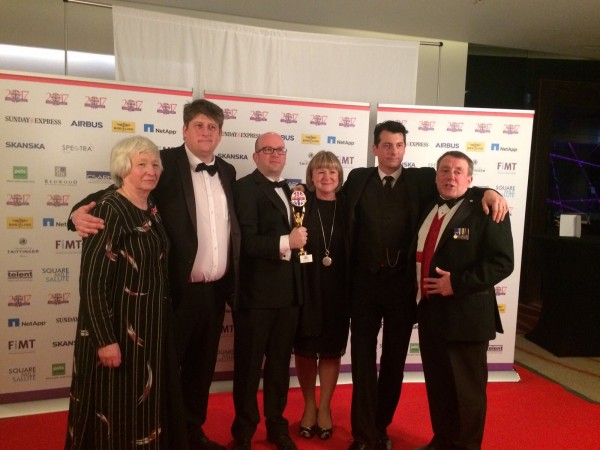 Forces Friends, a volunteer-led visiting service created in partnership between The Royal British Legion and Age UK Notts won The Forces in Mind Trust’s (FiMT) ‘Working Together’ Award at the 2017 Soldering on Awards.

The Forces Friends team was handed the prestigious award during a ceremony at the Park Plaza Hotel, Westminster, hosted by Angela Rippon and Cassidy Little, in recognition of their commitment and collaborative approach to supporting the Armed Forces community.

The volunteer visiting service was established in 2016 specifically for veterans aged 60 plus and their dependents, following The Royal British Legion’s ‘UK Household Survey of the Ex-Service Community 2014’ that found 46% of the veteran community are aged 75+ and many of them report problems with loneliness and social isolation, mobility and self-care difficulties.

Forces Friends is delivered by Age UK Notts, and was made possible by a grant from The Royal British Legion totalling over £37,000. The project provides a volunteer visitor to befriend and support lonely or socially isolated veterans on a short term, basis living in Nottinghamshire.

Founded in 2011, the Soldiering On Awards provide National Recognition for the outstanding achievements of those who have served their country, and individuals and groups who work together with the Armed Forces Community.

Linda Flecknell, Area Manager East Midlands at The Royal British Legion, comments: “Forces Friends is a fantastic example of how two charities with different expertise but a shared aim, can come together to help change the lives of the people in our community. In a short space of time Forces Friends has come to mean so much to the veterans of Nottinghamshire and we are so proud of the joint Age UK Notts and Legion Forces Friends team that has made this project a realty.”

John Anderton of Age UK Notts, comments: “The award means a lot to us as an organisation because it recognises the very valuable contribution made by our volunteers to improving the lives of older veterans and their dependents.  We acknowledge the support of the Royal British Legion at branch and area level and it’s been a pleasure to work in such close collaboration.