Aviator Josh Peacock of RAF Cosford DSAE rallied 11 of his colleagues as well as the course leader, Aviator Alex Pinnegar – and Sochi, the leader’s Husky – to scale Snowdon for SSAFA, the Armed Forces charity smashing their target of £200 with a total of £882. 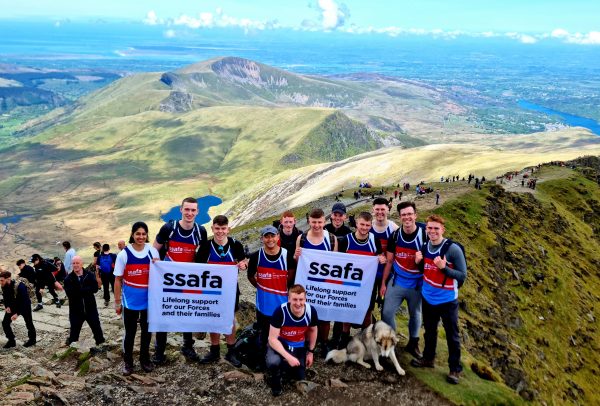 Josh, aged 20, from Manchester, organised the challenge – which for some trainees was their first mountain climb – not only to raise funds, but also awareness of SSAFA, which helps thousands of veterans, serving personnel, and their families each year.

An Avionics Course 1238-024 at the Defence School of Aeronautical Engineering, Josh said:

“Snowdon is the highest mountain in Wales and England, at 1,085 metres above sea level, and the particular route we took on is called Rhyd Ddu, It’s a 12-kilometre path and took around six hours.

“It was tiring, but fun, and well worth the aching legs because SSAFA is a fantastic charity that we all feel deserves more recognition for all the tremendous work it does for serving or retired personnel – Regular or Reserve – and their families day in, day out.”

Josh, whose ambition is to further continue his involvement with future RAF mountaineering opportunities through the RAF Mountaineering Association, added that he and his fellow trainees were “… just amazed at how much we’ve raised so far, more than four times our target”, which he believes underlines the high regard in which SSAFA is held by the public, both civilian and military.

“It was a tremendous experience for the whole course and an outstanding result in our fundraising for SSAFA, a charity close to all of our hearts. It was brilliant to see everyone get so involved and our sincere thanks go out to all friends, family and colleagues who supported the fundraising. We all look forward to getting involved with further fundraising for SSAFA in the future.”

For more information on the charity’s work, visit ssafa.org.uk.