The RAF Benevolent Fund recognised the inspirational achievements of its supporters and fundraisers at its prestigious annual awards ceremony on 9 June. 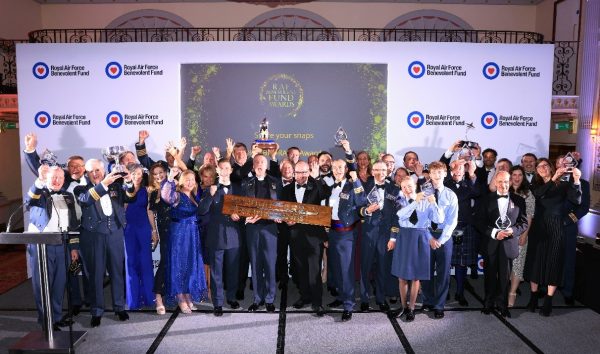 The event, held at Plaisterers’ Hall in London, was attended by hundreds of RAF personnel, veterans, and supporters of the Fund.

Now in its tenth year, the RAF Benevolent Fund Awards recognise and celebrate the outstanding contributions of fundraisers, volunteers, and partners.

Among those recognised, the title of RAF Station of the Year was won by RAF Valley, where 2021 saw the development of the first RAF Benevolent Fund Committee at the station, with the committee organising a host of fundraising events in support of the Fund. And Wing Commander Mike Ainsworth picked up the ‘Above and Beyond’ award for his incredible cycling achievements and role in the hugely successful Dambusters Ride, which returned to Lincolnshire again this year.

“It has been wonderful to see all our generous supporters and fundraisers as we once again celebrate their efforts.

“The awards are a fantastic opportunity to recognise all of the great work that allows us to continue supporting RAF veterans, serving personnel and their families and making a real improvement to their lives. Many congratulations to all this year’s winners, their inspirational enthusiasm, creativity, and generosity has been wonderful to see. From everyone at the RAF Benevolent Fund – thank you.”

Below is the full list of winners of this year’s awards.