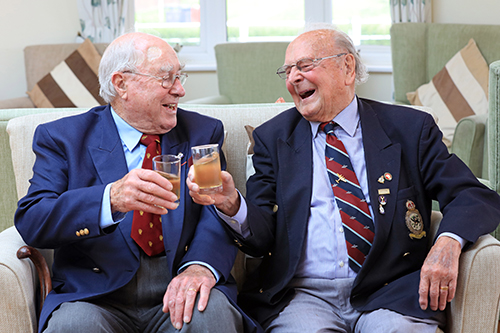 The Royal Air Force Benevolent Fund is celebrating after receiving a £2,500 gift from The Patron’s Fund, the charitable fund set up to acknowledge the work of the charitable organisations for which Her Majesty The Queen acts as a Patron, on the occasion of her 90th  birthday.

Around £750,000 has been made available to distribute between nearly 300 charities and other organisations in the UK and the Commonwealth. The Fund received generous donations from a range of supporters; including individual donors, businesses, schools, community groups and the proceeds from The Patron’s Lunch, the event held on the Mall on 12 June 2016.

“The RAF Benevolent Fund is delighted to have Her Majesty The Queen as our Patron and thank The Patron’s Fund for this generous gift. The money will be used to support the costs of our Lunch Club service at Princess Marina House (PMH), our respite centre on the South-East Coast. The Lunch Club brings elderly RAF veterans together and provides meals, afternoon entertainment and transport to and from PMH for those who need it. These vital funds will help continue the service on a daily basis and allow us to plan the Club’s continuation in 2018, for which we are truly grateful.”

Sir Stuart Etherington, Chair of The Board of Trustees for The Patron’s Fund, said:

“The Patron’s Fund is very pleased to be able to support The RAF Benevolent Fund with its valuable work. The RAFBF is among hundreds of organisations for which The Queen acts as a Patron, which between them make a difference to causes and communities in the UK and throughout the Commonwealth.”

Find out more about our Lunch Club at Princess Marina House