On 11 April 2019 a team of RAF fundraisers are planning to scale the heights of one of London’s most iconic skyscrapers for the second time, in support of the RAF Benevolent Fund in commemoration of their centenary year.

The Gherkin, known officially as 30 St. Mary’s Axe, consists of 38 floors and 1,037 steps. With the RAF record ranked at 50 ascents in 12 hours, this year’s team of robust men and women are in competition to set the new record. 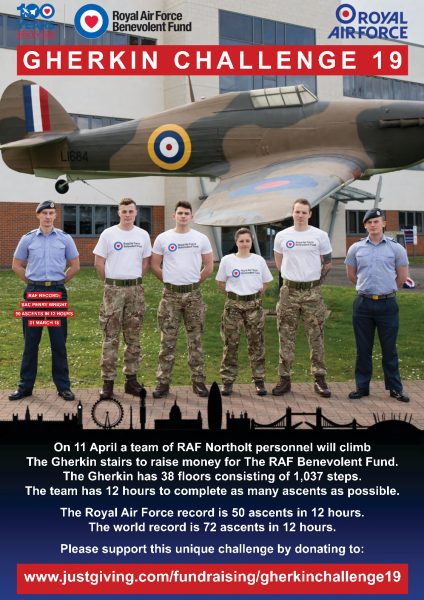 SAC Perry Wright and SAC Karl Cassar completed the challenge in 2018 and are back again as supporters for the new team to scale the urban mountain.

The four challengers will firstly take on 25 ascents each, to represent 100 years of the RAF Benevolent Fund. After that, it’s up to them to see if they can make it past 50 to set the new record.

When scaled 50 times, the total length of the Gherkin building reaches the height of the world’s tallest Himalayan mountain- Mount Everest.

SAC Perry Wright is the current RAF record holder, with plans to come out on top again this year.

SAC Wright said: “As far as I’m concerned, if they want to take out the record, they’re in for a rough ride! This challenge was by far the hardest event I have ever taken part in. The only way I can explain it is like when you hit a wall during a marathon, it was like that for 12 hours solid.

“After a long-standing connection with the RAF Benevolent Fund, this event allows us the opportunity to raise funds that will directly impact the people of the Royal Air Force, from a charity that feels like family.”

“This year is an exciting year for the Fund, as we mark our centenary and it’s thanks to supporters like this, we are able to carry on doing the work we do, looking after the RAF Family and seeing them through their toughest times.”

The RAF Benevolent Fund has supported more than 55,000 people with a wide range of welfare needs, from relationship counselling, to the Airplay youth support scheme to care home top up fees for elderly RAF veterans.

To sponsor the RAF personnel in the 2019 Gherkin Challenge, go to: http://www.justgiving.com/GherkinChallenge19

The Royal Air Force Benevolent Fund is the RAF’s leading welfare charity. We exist to support current and former members of the RAF, their partners and dependants, whenever they need us. In 2017 we spent £18.8m supporting more than 55,000 members of the RAF Family. For more information visit:  www.rafbf.org Twitter: https://twitter.com/RAFBF