You are here: Home / News / News / RAF team hauls whisky barrel up and down Ben Nevis to raise £1,800 for RAF Benevolent Fund

RAF team hauls whisky barrel up and down Ben Nevis to raise £1,800 for RAF Benevolent Fund

A team from RAF Honington, near Bury St Edmunds, climbed Scotland and the UK’s highest peak, Ben Nevis – with a whiskey barrel – to raise money for the RAF Benevolent Fund, the RAF’s leading welfare charity. 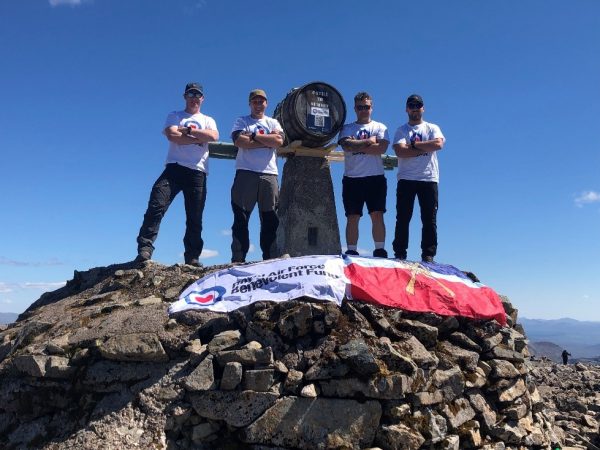 The zany fundraising idea came to Flt Lt Stuart Clark a few years ago and had to be put off due to the pandemic, but it was finally realised at the start of June when the team, who are all members of the RAF Regiment, was able to travel freely to Scotland.

“It seemed like something unique that hadn’t been done before and weird enough to be attention grabbing and challenging. How many people can say they carried a whisky barrel up the UK’s highest mountain? Judging by the looks on some people’s faces as we walked past it had the desired effect. This year was the first chance I had to do it, aiming for the time of year likely to give the best weather and longest periods of daylight.

“It went much better than I’d ever expected. I honestly expected to be up there in the dark, 12 hours after we’d started, hating each other and debating about pushing the barrel of a cliff! But, in the end we smashed it, getting up and down in a time some people would struggle to manage without the barrel. The weather was fantastic and the looks of disbelief were worth it.”

The team, which comprised Stuart as well as Flt Lts Campbell Steel and Robert ‘Bobby’ Holmes, both of Honington, Suffolk and Sgt Michael ‘Smudge’ Smyth, of Mildenhall, Suffolk, raised £1,800 for the RAF Benevolent Fund.

“I’ve seen the good that the RAF Benevolent Fund does and having observed one of the funding boards where they were judging cases and requests for support, I was impressed by the breadth of people the RAFBF helps. I think the scope of its work is admirable and I’d like to think that should I ever need to call on the fund for help I’ll have offered it some support before I needed its help.”