You are here: Home / News / News / RBLI’s transformative employment support programme for veterans expands across Wales after backing from the Morrisons Foundation 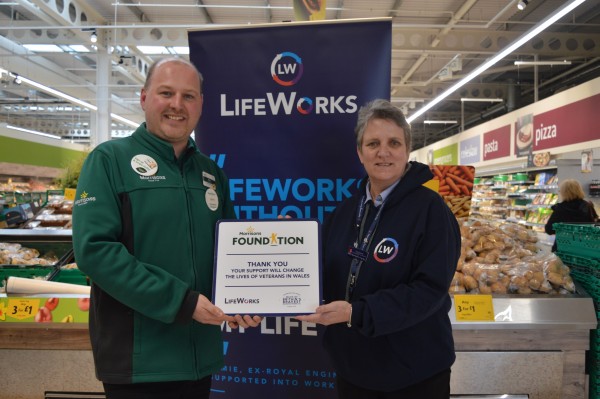 Unemployed Welsh veterans are to be handed a lifeline after a transformative employment support programme for ex-service personnel has been given financial backing.

Currently in Wales, 1 in 20 has served in the Armed Forces while, across the country, working-age veterans are twice as likely to be unemployed as civilians.

However, military and disability charity Royal British Legion Industries is now set to tackle the issue by rolling out additional courses of their LifeWorks programme after receiving more than £96,000 from the charitable arm of supermarket giant Morrisons, The Morrisons Foundation.

First developed in 2011, RBLI’s LifeWorks programme has seen almost 1000 veterans from around the UK attend the course – with 83% finding employment, training or volunteering within 12 months.

RBLI’s Head of LifeWork Iain Downie said the funding will mean LifeWorks can directly tackle an ongoing problem with unemployment amongst the Welsh veteran community.

He added: “Transitioning from the Armed Forces into the civilian world can be an incredibly challenging period for the service leaver.

“Without employment, the lives of veterans can too often spiral downwards, resulting in a loss of independence, financial difficulties and drug and alcohol abuse – this is simply unacceptable.

“However, now, with the generous support of the Morrisons Foundation, many more Welsh veterans will be given a second chance at life.

“The Morrisons Foundation has changed numerous lives across the UK through their charitable support and now they will play a pivotal role in ensuring that the veteran community across Wales are given the opportunity to overcome obstacles and secure rewarding and sustained employment – and for that we are incredibly grateful.”

The Morrisons Foundation, which was set up in 2015 to make a positive difference to people’s lives across England, Scotland and Wales, has donated more than £20 million to worthy causes, previously supporting RBLI in providing crucial services for veterans, whereby £293,360 was contributed towards 24 apartments for injured servicemen and women in Aylesford, Kent.

Trustee of the Morrisons Foundation David Scott said: “We are very pleased to join forces once more with RBLI, this time in the delivery of the LifeWorks programme in Wales.

“We recognise that there is a real demand for this programme throughout the country, so to support Welsh veterans to gain rewarding employment, achieve independence and, ultimately, get a second chance at life following a turbulent transition from the forces fills us with great pride.”

LifeWorks courses will take place in both the north (TBC) and south of wales (Cardiff). For more information on LifeWorks, contact the LifeWorks team on free 0800 319 6844, email lifeworks@rbli.co.uk, or visit wearelifeworks.org.uk