You are here: Home / News / News / Record-chasing Lincolnshire RAF personnel to fly the coastline in paramotors in aid of RAF Benevolent Fund

A team of RAF personnel, based in Lincolnshire, are set to become the first people ever to paramotor around the entire coastline of the mainland UK, to raise funds for the RAF Benevolent Fund, the RAF’s leading welfare charity. 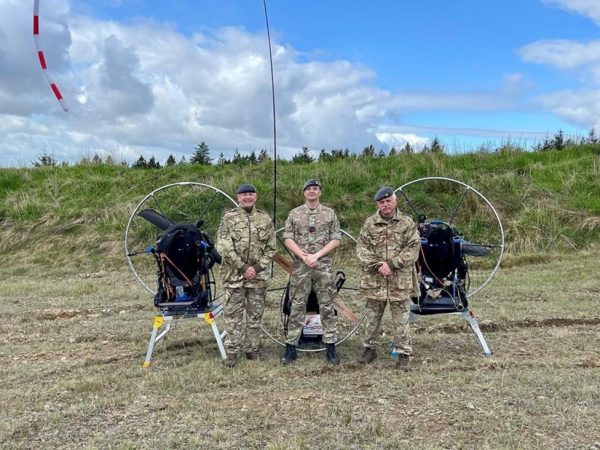 The team of Force Protection personnel, based at RAF Waddington in Lincolnshire, are known as ‘The Raptors’ and are embarking on the daring – and potentially record-setting – fundraising feat to mark 80 years of the RAF Regiment and 100 years since the formation of the RAF Armoured Car Companies.

They will be supported by a small ground team of Reservists that will follow the attempt in vehicles.

Mike, who joined the RAF in 1978, started paragliding in 2006 before converting paramotoring in 2016.

“Tim and I are RAF Regiment Reservists and Andy is a Regular RAF Police Officer. I am looking forward to the challenge and hope to inspire and promote adventure to the young and old within the Air Force and the Corps.”

The 61-year-old revealed he was looking forward to “good weather, teamwork, establishing a record and completing the challenge”.

“Our aim is to raise funds for two worthy causes, the RAF Benevolent Fund and the Centurion Fund.”

The formal attempt will take place 1-30 August, but there are a number of build-up events at various locations around the UK.  The aim is to complete the 3,192 miles of the UK coastline in 30 days.

To support the fundraiser visit: https://www.justgiving.com/fundraising/Ukparamotorchallenge