You are here: Home / News / News / ‘Reporting Sexual Offences through the UK Service Justice System – should rape during military service be tried in the civilian courts?’

‘Reporting Sexual Offences through the UK Service Justice System – should rape during military service be tried in the civilian courts?’

The UK military deals with sexual offences committed by service personnel through the service justice system (SJS). However, policy scrutiny and media attention have highlighted significant failings in the SJS response to sexual offences, including low conviction rates, sexual offences not being properly recorded, and failings in investigations by SJS prosecutors.  Several recent government reviews have recommended that all rape cases committed within the UK armed forces, be dealt with in the civilian criminal justice system (CJS) rather than the SJS. However, this recommendation has been rejected by the Ministry of Defence on that basis that the SJS can adequately deal with these offences. 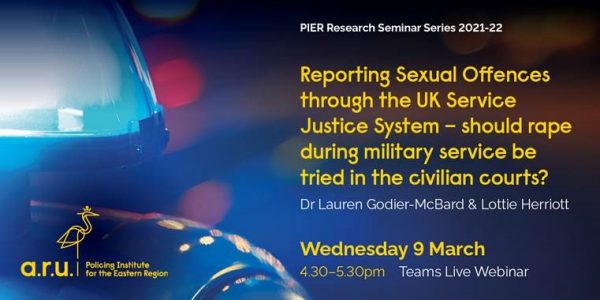 In this seminar, we will report an in-depth comparative analysis of the CJS and SJS processes and responses to sexual offences to understand the successes and failures of each system. Ultimately, we will highlight significant obstacles to justice in both systems, including numerous barriers to reporting, poor victim treatment, high attrition and low convictions.

Lauren Godier-McBard is a Senior Research Fellow and leads the Women & Equalities Research workstream for the Veterans & Families Institute for Military Social Research at Anglia Ruskin University.  Lauren’s main research interests include the needs and experiences of women during and after military service, and interpersonal/sexual violence in the military context. Lauren recently completed the first UK study bringing together all that is known about the health and well-being of female veterans, commissioned by Cobseo and NHS England & NHS Improvement. Lauren’s current projects are focused on the impact of military service on women’s mental health and help-seeking behaviours, and the process and impact of reporting sexual offences through the Service Justice System.

Charlotte Herriott is a Lecturer in Criminology and Policing at ARU. Her research focus is on justice responses to sexual violence in England and Wales. Her PhD research “Is the Jury out on Sexual History Evidence?” was the first worldwide to examine the impact of sexual history evidence on mock jury deliberations in rape trials. She is now working alongside colleagues at the Veterans & Families Institute, comparing civilian versus service justice system responses to sexual victimisation and examining barriers to reporting sexual violence in the military context.

Tickets can be booked via Eventbrite.

If you have any questions or wish to unsubscribe, please email PIER@aru.ac.uk