You are here: Home / News / News / Royal Ascot supports The Armed Forces for the fifth year

Royal Ascot supports The Armed Forces for the fifth year 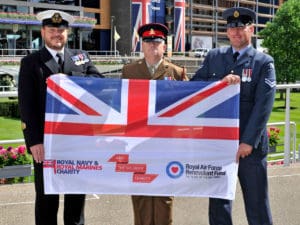 This year, the unofficial Armed Forces Day at Ascot Racecourse took place on the Friday, 23rd June. Military stewards collected for ABF The Soldiers’ Charity as well as The Royal Navy and Royal Marines Charity and The RAF Benevolent Fund.

Supported by the Trustees of Ascot Racecourse, there were two-for-one tickets available to the Armed Forces and their guests, which included exclusive access to the Armed Forces bar and lounge. Proving to be a popular event, an impressive 2,650 tickets were sold! 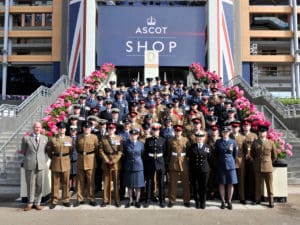 Stewards carried out a collection throughoutthe day which raised a total of £22,103! Not only did the generous collection go towards the fundraising total, but the Trustees kindly donated £2.50 from the price of each jug of Pimms sold on the day. Our luck was in, with not a cloud in sight and the temperatures soaring, an impressive 5,499 jugs were consumed adding £13,747.50 onto the total raised.

If that wasn’t enough, throughout the race meeting soldiers from the Household Cavalry Regiment, the Welsh Guards, the Royal School of Military Survey and 29 Regiment RLC undertook collections at Ascot Station, kindly authorised by SW Trains, with £10,858 being raised for The Soldiers’ Charity.