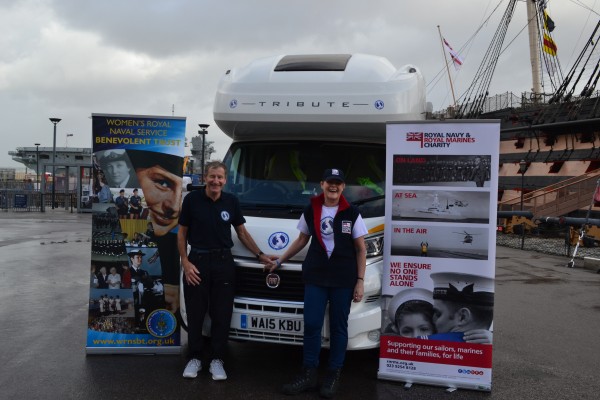 A Commander with the Royal Naval Reserve has chosen to spend the first year of her retirement taking on a gruelling charity walk around mainland Britain’s coastline.

Commander Jane Allen, who is soon to end a 37-year career, marked the beginning of her Victory Walk outside Admiral Nelson’s flagship, HMS Victory, in Portsmouth on Saturday 21st October.

Travelling anti-clockwise around the coastline, Jane started the first leg of her solo long-distance walk in Portsmouth on Saturday morning and will continue around mainland UK.

The Victory Walk will continue throughout 2017 and 2018, aiming to raise money for the Royal Navy and Royal Marines Charity (RNRMC) and the Women’s Royal Naval Service Benevolent Trust (WRNS BT).

After a fulfilling career in the Naval Service, Jane decided that the RNRMC, the principal charity of the Navy, was an ideal choice to be one of her chosen charities. The money raised by Jane on behalf of the RNRMC will go towards supporting sailors, marines and their families, for life.

“Jane will be raising vital funds for the Royal Navy and Royal Marines Charity. The money that Jane raises on her long walks around Britain’s beautiful coastline will help us to allocate vital funds to sailors, marines and their families throughout the United Kingdom and beyond.

In the centenary anniversary year of the WRNS, Commander Jane Allen embodies the spirit, grit and determination of those that preceded her. On behalf of the RNRMC, we wish Jane and her husband Frank, the very best of luck with their yearlong adventure.”

Jane joined the Service when the Women’s Royal Naval Service was separate from the Royal Navy, so the WRNS BT was a charity that also had an obvious affinity with her: it supports all women who joined the WRNS before the Service was disbanded.  There are currently an estimated 40,000 former members of the WRNS who are celebrating the 2017 centenary year, together with women in today’s Royal Navy.

“Commander Jane Allen is a long time support of the WRNS Benevolent Trust and has also been a key player in ensuring the success of WRNS100, a project which this year is marking 100 years since the formation of the Women’s Royal Naval Service (WRNS) in 1917.

The members of the Trust will be closely monitoring her progress around the UK and we all wish her every success in this ambitious project.”

Commander Allen, who is supported by her husband and former Royal Marine, Frank, will aim to complete the 5,500 mile challenge and return to Portsmouth by October next year. The final leg will see Jane return to do her final miles around Portsmouth and finish at HMS Victory.

“Having had a long naval service and being closely involved with the WRNS100 Centenary year, selecting the RNRMC and WRNS BT charities was the obvious choice. Between us, Frank and I, have almost 70 years’ service in the Royal Navy and Royal Marines, from Aden to Afghanistan.   The Victory walk seemed a good way of marking the end of my career, taking on a year’s challenge and ‘giving back’.”

“I’d like to wish Commander Jane Allen the best of luck with her coastal walk for the Royal Navy and Royal Marines Charity. As she prepares to retire from the Royal Naval Reserve, Jane is bravely throwing herself in at the deep end again to raise money for the principal charity of the Royal Navy and the WRNS Benevolent Trust.

In doing so, Commander Allen continues to embody the commitment and resolve demonstrated by those in the naval services. On behalf of Navy Command, I wish Jane the best of luck with her challenge and hope that she enjoys her retirement.”

To support Commander Jane Allen on her Victory Walk challenge, visit http://uk.virginmoneygiving.com/victorywalk17-18 . All proceeds will be equally split between the RNRMC and WRNS BT, both recognised charities of the Royal Navy.