Veterans living at The Royal Star & Garter Home in Surbiton have been given plenty to cheer about as the Home celebrated its fifth anniversary on Friday 24th August.

Squire’s Garden Centre, Long Ditton, announced it has chosen the Home as its official charity of the year. To celebrate the Home’s birthday, Squires gifted two wooden barrels filled with colourful flowers. The beautiful gift was particularly thoughtful as the traditional fifth anniversary gift is wood!

Garden Centre Manager, Anne Dedman, commented, “Squires Long Ditton are delighted to be supporting The Royal Star & Garter Homes as their chosen Charity of the Year.  During the coming year we hope to help raise awareness as well as much needed funds for this deserving Charity.”

The lovely gardens at the Home were decorated with balloons and bunting, there was live music from the RBL Buckinghamshire Band and a quiz for the residents.

Resident Mella said: “It’s been lovely, I especially liked having all of the children here to join in the fun. Their dancing is always fun to watch!” 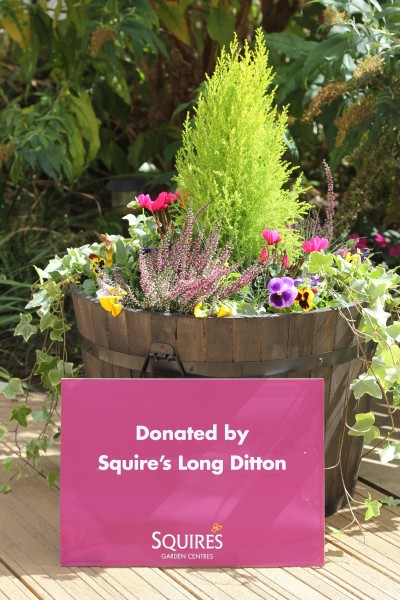 There are weekly visits from Toad Hall Nursery pupils, and many of the Home’s 55 volunteers live locally.

Surbiton Home Manager, Chrissie Heyes, said: “We have had a wonderful day and it was made all the more special by Squire’s Long Ditton.

“We are delighted that the garden centre has chosen the Home to be their charity of the year and love the thoughtful and generous wooden gift they have given.

“We truly feel at home in Surbiton and part of the community, and we look forward to celebrating many more anniversaries.”

Since its opening in 2013, the Home has grown increasingly involved within the community. Its annual Summer Fete is especially popular, and each December a Starlight Service, which remembers past residents and those who are sadly no longer with us, is held at nearby St Matthew’s Church.

The Home provides the very best nursing and dementia care to veterans and their partners.