You are here: Home / News / News / Sale Sharks and the Royal British Legion use rugby to help military veterans back into work and tackle social isolation 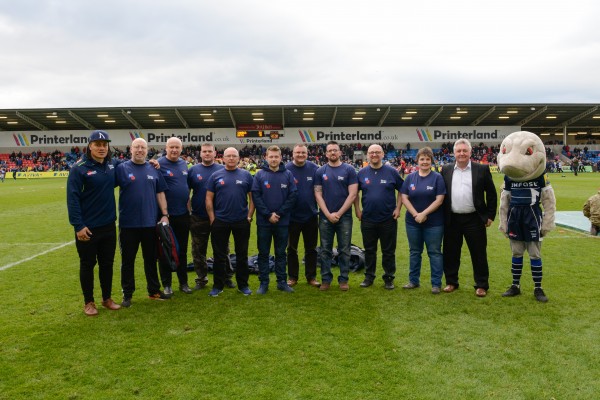 A stunning pre-match display from a team of Royal Marines marked the launch of a new Sale Sharks community programme that uses rugby to help military veterans across the North West get back into work.

The Sharks Forces programme, run in partnership with the Royal British Legion, will work with around 60 veterans over the next 12 months to help them develop the confidence and skills they need to find employment.

In addition to helping veterans get back into work, the Sharks Forces programme aims to help improve veterans’ physical and mental wellbeing, develop social activities and tackle social isolation.

The launch of Sharks Forces was celebrated ahead of the club’s Premiership fixture against Bath as a team of Royal Marines from Chester dropped into the AJ Bell Stadium on zip wires to deliver the match ball.

The programme’s first cohort of attendees joined staff from the award-winning Sale Sharks Community Trust and programme partners on the pitch to help launch the programme and celebrate their time on the course.  And the 8,000-strong crowd was treated to a display of hand-to-hand combat on the pitch.

The Royal British Legion estimates that more than 120,000 military veterans of working age are currently looking for work in the UK.  And in a report released in October, the Legion found a ‘significant veterans’ employment gap’ and claimed an ‘unspoken discrimination’ was preventing many from securing roles.

Alison Bunn, Area Manager for the Royal British Legion, which is funding the project, said: “All of the projects we give funding to are worthy recipients, but Sharks Forces really stands out. Much of our work involves empowering our armed forces community to improve their physical and mental wellbeing, so we’re really pleased to be supporting Sale Sharks in their work. Social isolation can take many forms, but it’s not something that people like to talk about or admit to, especially men, but coming together at these workshops will allow them to share their experiences and learn new skills together. This programme will also help to increase their opportunities in civilian life.”

Trust coach Scott Briggs, whose father served in the army, is leading the Sharks Forces programme. “Moving from military to civilian life is a huge transition for all who have served in the armed forces,” he said. “Around 20,000 personnel leave the UK armed forces annually and have to re-integrate back into civilian life. This often leads to a minority of service leavers facing a range of social and mental health-related problems. We want to help break down these barriers and help veterans live longer, happier lives.

“Each of the veterans that have signed up have very different but equally remarkable stories from a number of tours like Afghanistan, Iraq and the Gulf wars. These men and women have served their country with distinction but for whatever reason, are overcoming barriers in their lives.  They have so much to offer and we want to help them break down the barriers that exist and translate the huge array of skills they have into the civilian market.”

Sharks Forces coaches will deliver six projects over the course of the next 12 months, each lasting 7-8 weeks, as they look to tackle many of the problems veterans face by assisting them with writing job applications, developing CV writing skills and exploring interview techniques.

The Sharks Forces programme won’t be exclusively classroom based. Trust coaches will be using the values and power of sport – and particularly rugby.

“We want to help develop the physical and mental wellbeing of the veterans too so the programme will include gym and activity based sessions” Scott added. “And we are hoping to use the positive power of rugby by signposting participants to their local club to help them develop strong and supportive social networks.”

Sale Sharks Community Trust Manager Jonny Acheson added: “The club and the Trust is committed to using rugby to break down barriers that exist both on and off the field. Sharks Forces is going to give so many fantastic people the opportunity to find a career that pays the bills but more than that, gives them a sense of belonging again.”

If you are interested in getting involved with the Sharks Forces programme, contact Scott Briggs by emailing scott.briggs@saleharks.com or Jonny Acheson at john.acheson@salesharks.com.

Pictured: The veterans from the first Sharks Forces cohort on the pitch with Sharks star TJ Ioane (L)
Notes for editors

The report ‘Deployment to Employment’ was released by the Royal British Legion in October 2016.