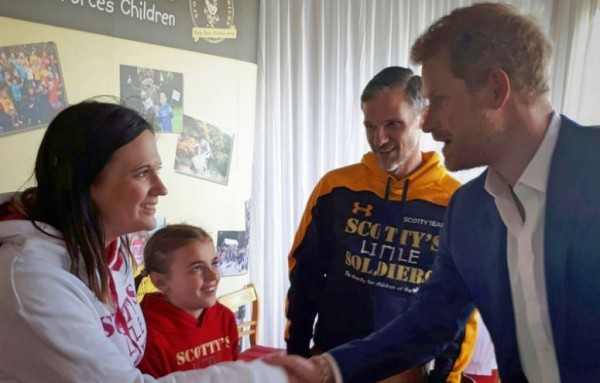 Prince Harry and the Duke and Duchess of Cambridge welcome hundreds of Scotty’s Little Soldiers members to Buckingham Palace.

The event, which took place in the gardens of Buckingham Palace, was exclusively for children of those who have died serving in the Armed Forces.

The event saw the grounds of Buckingham Palace turn in to a playground, with children of all ages being treated to a whole host of fun activities including face painting, water balloons, circus games, a display from the RAF Falcons parachuting and exclusive appearances from comedian and ventriloquist Nina Conti, singer Jess Glynne and Britain’s Got Talent winning magician and Scotty’s Little Soldiers ambassador, Lance Corporal Richard Jones.

Amongst the 1,800 adults and children in attendance yesterday was Scotty’s Little Soldiers founder Nikki Scott and her two children twelve-year-old Kai and eight-year-old Brooke.

Nikki lost her husband, Corporal Lee Scott, in Afghanistan in 2009, and witnessed first-hand how losing a parent at such an early age can have an enormous impact. It was on holiday months after she lost Lee that she realised she hadn’t seen Kai smile since his death and that there was no support available just for the children.

Nikki set up Scotty’s Little Soldiers in 2010 in memory of Lee and with the main aim of helping children who have a lost a parent while serving in the British Armed Forces smile again. Over the last seven years the charity has grown to now support almost 300 bereaved military children.