You are here: Home / News / News / Shropshire blind veteran to run 40 miles in Portsmouth to mark the 40th anniversary of the Falklands War

A blind veteran from Shropshire is running 40 miles to mark the 40th anniversary of the Falklands War and will be raising money for Blind Veterans UK, the national charity for vision-impaired ex-Service men and women. 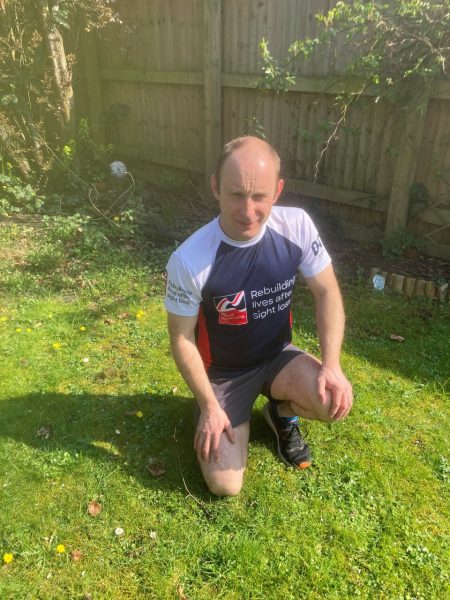 Alan Lock, 42 and from Shrewsbury, will be putting on his running shoes on 11 May and completing 160 laps of a Royal Navy athletics track in Portsmouth before running his final mile to HMS Victory at the city’s historic dockyard to finish his ultra-run.

“I have an emotional connection to Portsmouth, it’s not only the base from which the Falklands task force began their journey in April 1982 but is also where I spent much of my own Navy service training to become a submarine engineer.

“One of the first Blind Veteran UK members to support me when I first lost my sight was themselves blinded in the Falklands conflict.

“It seems fitting to therefore be taking on this ultra-run to help Blind Veterans UK support Falklands veterans who have lost their sight, either during or after the conflict.

“I anticipate it will take me around eight hours to finish the run and I’ll be joined by a serving member of the Royal Navy to act as my guide.”

Alan joined the Navy in 2002 but just three years later, when he was 24, a rare genetic condition similar to macular degeneration took his sight and forced him to retire from the Armed Forces.

“I felt so lonely and was full of worry and uncertainty for my future. I’d been committed to a career with the Royal Navy; it’s what I expected to do for life but that was snatched away from me along with my eyesight.

“It sounds so simplistic but not being able to see properly has a massive impact on your life, I find it difficult to read, I can’t drive, and I can’t see people’s faces properly including my own daughter’s, which is heart-breaking.

“I joined Blind Veterans UK in 2005; the support, rehabilitation and equipment the charity has given to me has enabled me to live independently, pursue the sports that I love and re-train for a new career.

“I’ve been able to continue to run as the charity has provided me with a running machine. If I run outside of my home I need a guide but the running machine gives me the independence to run alone and unaided.

“I can’t thank Blind Veterans UK enough for all the support I have been given, it’s a special charity and has been by my side throughout my journey, giving me the confidence to see beyond the limits of sight-loss and to achieve things I thought would be impossible.”