You are here: Home / News / News / Skanska and Walking With The Wounded working in partnership to raise vital funds for those who served

Military charity Walking With The Wounded (‘WWTW’) is working in partnership with Skanska, one of the world’s leading project development and construction groups to raise vital funds to support those who served across the UK. 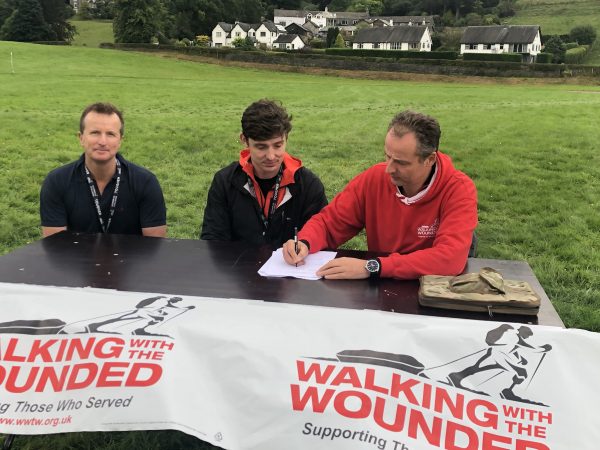 Known for working on major projects such as HS2 − the UK’s new high-speed railway, Skanska are building, upgrading, and maintaining the country’s infrastructure for future generations. They aim to bring together people and technology, as part of Skanska’s purpose to build for a better society.

Working in partnership with WWTW that supports those struggling with their mental health aligns nicely with the company’s focus on creating an inclusive work environment where everyone can be their whole self at work.  Skanska promotes an inclusive workplace which enables them to attract and keep a more diverse workforce that improves innovation and operational performance as well as creating healthier workplaces.

Last month Skanska took part in the charity’s Cumbrian Challenge event and raised a formidable £2,776 for those who served.  This amount could provide four courses of therapy sessions through WWTW’s mental health programme, Head Start.  Additionally the Corporate Partnership Agreement (CPA) between the two organisations was signed at the finish line of the event by Nick Denning, Capital Works Lead at Skanska and Fergus Williams, CEO at Walking With The Wounded and Paul Nanson CB CBE, Trustee of WWTW and Major General (Retired). – Please see image.

Furthermore Skanska are taking part in WWTW’s next major event, Walking Home For Christmas which specifically raises funds to support the charity’s work with the NHS – empowering ex-military and their families who are in a downward spiral due to poor mental health to thrive once more.

“We are thrilled to have partnered with Skanksa.”  said Fergus Williams, CEO at Walking With The Wounded. “With their support, our team will be able to continue to deliver our innovative, life-changing services to those who served and their families. The company’s ethos on inclusion and diversity and recognising how supporting members of their workforce with their mental health fits nicely with our company value, Client First and the importance of improving and importantly empowering ex-military and their families who are in a downward spiral due to poor mental health to thrive once more.  We would like to thank Skanska and their team for championing the Charity and look forward to working with them.

“Skanska is delighted to be working in partnership with Walking With The Wounded”, says Skanska UK President and CEO, Gregor Craig. “The charity performs vital work helping disadvantaged military veterans re-integrate back into society by sustaining their independence. We’re proud to be helping the charity run such positive programmes supporting those who have served their country.”