On 15 October, 2020, in one of the most eagerly anticipated events of last year’s Soldiering On Awards, Centenarian Hector Duff OBE MM. Legion d’Honneur was honoured as the Winner of the People’s Choice Award. During the Zoom Award ceremony, attendees of the spectacular event joined with SOA Ambassador and BRIT nominated classical singer Carly Paoli, to sing Happy Birthday to this charming, inspirational man as he celebrated his 101st birthday! Very sadly, shortly after this celebration of his wonderful, lifelong contribution to the military family, Hector passed away. 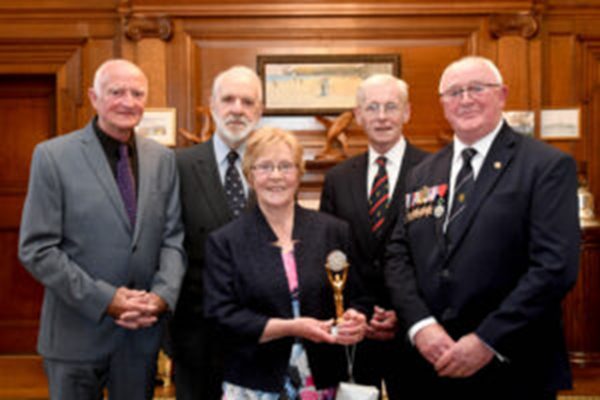 Hector’s life was recently commemorated in a formal reception on the Isle of Man, with Sir Richard Gozney, Lieutenant Governor of the Isle of Man, leading the proceedings. During this lovely event that celebrated Hector’s life and work, his family proudly received his Soldiering On Award. General The Lord Dannatt, President of the Soldiering On Awards, had written a few words to mark the occasion:

“It was our honour to recognise the depth and breadth of Hector’s contributions to the Isle of Man, the Manx community and to the wider armed forces. His military service and his subsequent wider community contributions are a shining light and a great tribute to him as a soldier and a man.

“The day we made the announcement that Hector was the winner of the People’s Choice Award just happened to be his 101st birthday, October 15th 2020. Quite a lovely coincidence! As a birthday present to Hector; we were able to get our Ambassador for the Arts, the wonderful soprano, Carly Paoli, to sing Happy Birthday to him. I do hope Hector was able to enjoy the accolade of his Soldiering On Award as much as he appeared to enjoy being the centre of attention for Carly Paoli as she sang beautifully to him for just a few minutes.

“It was a very happy occasion at Government House, attended by 56 guests including Hector’s family. The Lieutenant Governor, Sir Richard Gozney, spoke most warmly of Hector before handing his elder son the statuette. I spoke before reading the letter to heighten its importance and the part which had been played by Lord Dannatt in the selection process.”

Hector’s achievements were outstanding, and we are proud to shine a light on his work, and privileged to have known him.

Hector was universally admired, and his work and courage have been honoured with several awards, including a Military Medal for Gallantry in 1942, for his outstanding courage in Tunisia. In more recent years, he was awarded both the Tynwald Honour, a medal that demonstrates an outstanding and selfless contribution to Manx life over a significant period of time, and the Manx Lifetime Award. In addition, Hector proudly received an Empire Medal (BEM), followed by the Legion d’Honneur and an OBE. At his 100th birthday celebrations, Hector was awarded an additional Special Veteran’s UK Commendation.

After the war, Hector became a highly praised police sergeant. He has been described as a unique personality, physically and morally brave, modest to a fault, selfless and helpful. His determination to preserve and enhance memorials to those who lost their lives through war, and his resolve to aid those who continued to suffer, was outstanding.

Still a highly respected speaker at 100 years of age, Hector was much in demand as a guest at all the schools on the Island, talking about the horrors and heroes of war. He spoke to many audiences, and it was the school children he had so inspired, assisted by their teachers, who initiated his citation for the BEM.

“His powerful impact has been upon the Islanders of all ages, including cadets, school children, politicians, charity workers and parents, who have seen in him all that is best in a man who has served his country.”

“He is loved and venerated by Islanders of all ages.”

As a reminder, the People’s Choice Award Finalists are selected each year by an Independent Judging Panel from hundreds of nominations. These outstanding Finalists epitomise the spirit of the Armed Forces Community and the Winner is selected by public vote. Hector’s triumph in the 2020 public vote proves what a truly inspirational man he was.

Turning to this years’ awards the finalists for the 2021 Soldiering On Awards will be announced on Monday 21 June as part of Armed Forces Week. Stay tuned!