Veteran and SSAFA Caseworker, Penny Leggat, will take on the Kiltwalk from April 23-25 to raise funds for SSAFA, the Armed Forces charity. 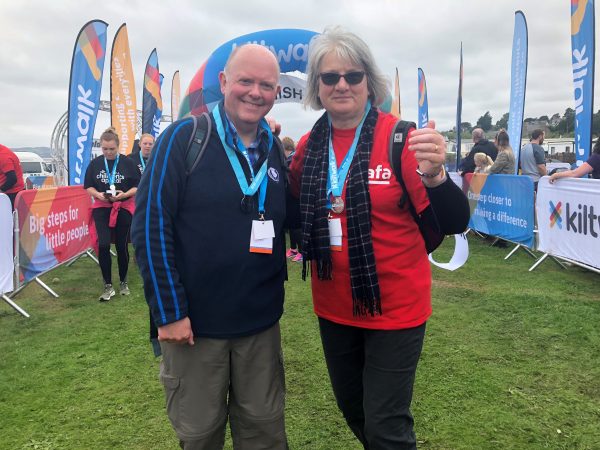 Penny currently volunteers for SSAFA Fife, an Armed Forces charity that helps the serving, reservists, veterans and their families.

Before, Penny served as a Queen Alexandra’s Royal Army Nursing Corps Nursing Officer (QA) and served in Germany, UK and a two year tour with the Australian Defence Forces.  She also served with 32 Field Hospital during Op.Granby/ Desert Storm.

On leaving the Service, Penny went on to work as a community midwife with SSAFA in Germany. On returning to the UK, with her serving husband, she brought up a young family, and worked with the Service Families’ Federations supporting and campaigning on their behalf for causes close to her heart.

“After my final move and moving into my own home, I became a SSAFA volunteer here in Scotland.

“As a SSAFA volunteer I have undertaken a variety of volunteer roles, as a caseworker and with the local branch committee.  I am working with a great team of passionate, professional individuals, bringing to the fore and using skills, experiences that I have had over the years.

“Being a SSAFA volunteer has given me the opportunity to meet a variety of different people, helping and assisting when needed, sharing their journey and successes. I hope to raise funds with the Kiltwalk to help support my local SSAFA Fife Branch”.

Penny will be walking alongside her husband Group Captain Jim Leggat OBE RAF as well as SSAFA Trustee, Graham Meacher and his wife Elizabeth. They will be taking a socially distanced walk of 13 miles around the Loch Leven Heritage trail.