You are here: Home / News / News / ‘SSAFA helped me through some of the darkest days, and this is why I’m fundraising for the charity’ says Lanarkshire man

‘SSAFA helped me through some of the darkest days, and this is why I’m fundraising for the charity’ says Lanarkshire man

With good walking routes and a summit of just 1,512 feet (461 metres), on average you can be up and down Ben A’an in the Trossachs in the same length of time that a typical film lasts, around two hours or so. However, the views from the summit of the surrounding lochs, glens, straths, and mountains mean people linger there a little longer. 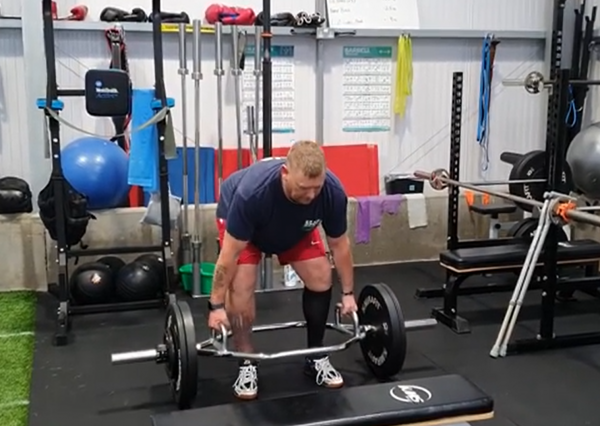 Andy McIntosh – Chairman of SSAFA Lanarkshire and late of the Cheshire Regiment – will undoubtedly enjoy the views, and deserves to.

Because of injuries sustained during his service, his ascent is likely to take five, perhaps more hours to reach the peak, with an overnight camp before the descent the following day.

He is climbing Ben A’an for SSAFA, the Armed Forces charity, and with the support of fellow members of Strathaven FTPT – a fitness facility in Andy’s home town of Strathaven, who came up with the idea for Andy’s challenge – he will scale that summit and smash his £1,000 target.

Andy takes up the story, saying:

“I was injured in an incident that happened while serving but left the Army fully fit, or that’s what I thought. One day at work, I collapsed and after much investigation it was found that I had over a hundred blood clots. The main vein that carries the blood from my leg back to my heart had disintegrated and this was put down to the trauma of the incident.

“I was told back in 2011 I would never be able to work again and for the next 10 years, I was living in chronic, constant pain, and was pumped full of morphine and other painkillers which in turn has damaged my kidney, and one of my lungs is permanently collapsed due to this medication.

“But SSAFA helped me through some of the darkest days, and had it not been for SSAFA… Well, I wouldn’t be here now.”

Andy described how, in 2019, he was prescribed cannabis spray for his pain, allowing him to come off opiates, adding:

“It was life changing; the ‘fog’ opiates gave me lifted, but one of my greatest passions before this all happened was walking the hills of Scotland. To be told I would never be able to do this again or any form of exercise was a killer for me.”

Fast forward to 2022, and Andy has been volunteering for SSAFA helping other veterans since five years, and is now Branch Chairman for SSAFA Lanarkshire.

Andy, who uses crutches day to day, said that one of the biggest things for him was finding Lucy and Alan, owners of Strathaven Fitness and Personal Training, who

“… have not let any of my disabilities stand in the way, and have helped me believe I can do anything again; giving me the sense of being part of a team again.

“When they came up with this walk up Ben A’an, I thought they were crazy but they and the team are pushing me to achieve my goal of walking up a hill once more and with the help of the team we will raise vital funds for SSAFA to support other veterans in Scotland.”

“Andy has been working hard in the gym to ensure he is as strong and fit as possible to get to the summit. The whole Team FTPT are behind him and there should be around 10 of us walking with him on the day. We’ll make sure he achieves his goal of being back in the hills again. Andy is an inspiration to the rest of the members as he gives it his all and we make sure his disabilities don’t define what he can achieve.”