Under fine skies on Armed Forces Day (June 25), veterans and cadets were greeted by with friendly faces and enthusiastic cheering in Liverpool. Representatives of the Merseyside Branch of SSAFA, the Armed Forces charity were also present. 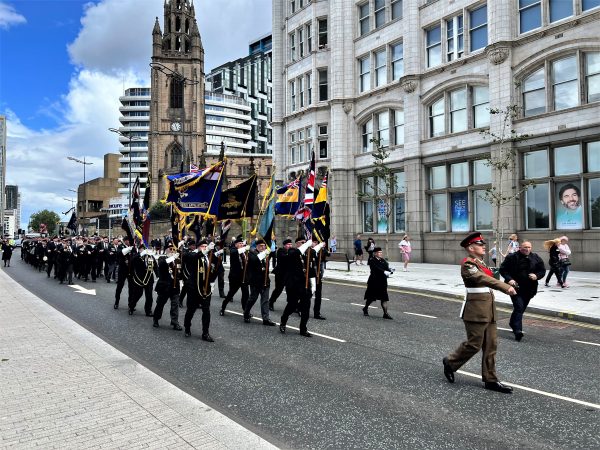 To rousing tunes played by the Band of the Duke of Lancaster’s Regiment, those parading – with the standards of RA (V) Aigburth, Royal Signals, the Liverpool Scottish Association, and the Merchant Navy – attended a thanksgiving service at the Liverpool Parish Church of Our Lady and St Nicholas and then on to the Royal Albert Dock.

Among those attending on behalf of SSAFA Merseyside was Malcolm Ranson who said:

“Armed Forces Day, in fact the entire Armed Forces Week an opportunity on Merseyside to show our gratitude to all veterans and those currently serving who have done so much to ensure our safety and provide much-needed support when necessary.

“Here on Merseyside, Regular Armed Forces were the first in the country to be used to run mass Covid testing centres which proved to be highly significant in the fight against Coronavirus. The whole population of Merseyside will never forget that.”

Also present were Her Majesty’s Lord-Lieutenant Mark Blundell, The High Sherrif of Merseyside, Lesley Martin-Wright, the Right Worshipful the Lord Mayor of Liverpool, Cllr Roy Gladden, with the various local mayors, and the head of the Army in the North West, Colonel Darren Doherty.

SSAFA has been providing support to veterans, serving personnel, and their families for 137 years. To find out more, including how to become a volunteer for the UK’s oldest tri-service charity, visit, ssafa.org.uk/merseyside.