News from a friend of F4H– Armed Forces Day in Taunton

Earlier this year, Ronnie – a former delegate and now Friend of F4H – was discussing with her fellow Veterans’ Breakfast Club friends what Taunton was planning for this year’s Armed Forces Day.

Residents at The Royal Star & Garter Homes have been awarded HM Armed Forces Veterans Badges in recognition of their military service.

Visitors were today treated to an exclusive preview of the innovative OurEnterprise Veterans’ Campus at Wilton Hill, in Wilton, near Salisbury, ahead of the first veterans moving in later on this summer.

As we approach Armed Forces Day and celebrate the bravery of our troops past and present on 29 June, we look at one resident who possesses courage in abundance.

All hands on deck to help our Veterans bounce back! 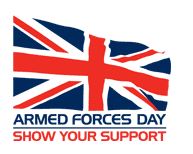 Armed Forces Day is a chance to show your support for the men and women who make up the Armed Forces community: from currently serving troops to Service families, veterans and cadets

Can the Army Build on its OA Inter-Services Triathlon Success?

In 2017 the Army won all three team awards, both veteran individual awards and the fastest male officer award. The Male Team Captain, Major Edd Charlton-Weedy, spoke to us about competing in the championship.

This fantastic event will shine a national light on the tremendous work of our awe-inspiring UK Armed Forces, and our heroic Veterans community, all against the backdrop of our beautiful city.

As the home of UK Land Forces for nearly half a century and with close ties to military bases all around the area, Salisbury is a fitting location to showcase our Nation’s Armed Forces.

The disabled veterans at The Royal Star & Garter Homes in Surbiton paid tribute to British Service personnel past and present by raising the Armed Forces Day Flag in advance of Armed Forces Day on Saturday 30 June.

The Flag was raised in front of residents, family, staff, volunteers and the local CCF unit.

Earlier in the day, the Home held a ceremony to present new residents with their Armed Forces Veterans badge. Residents who are partners of veterans received a special Spouses badge.

It’s Armed Forces Day this Saturday, but we’re here for officers all year round…

This weekend celebrates the contributions made by the British military, including officers.

The OA continues to support the officer community, whether that is helping them to find new careers after leaving the Armed Forces or access welfare support when needed.

Richard Sanders is a former Major in the Royal Logistic Corps the OA Employment Team supported. He had a one-to-one career consultation in March with Lisa Jones, an OA Career Consultant who also previously served as an Army officer, which helped him to be job ready and successfully apply for a new role.

📢There are only THREE DAYS left to apply for the Covid-19 Impact programme emergency fund. Grants can be used for s… twitter.com/i/web/status/1…