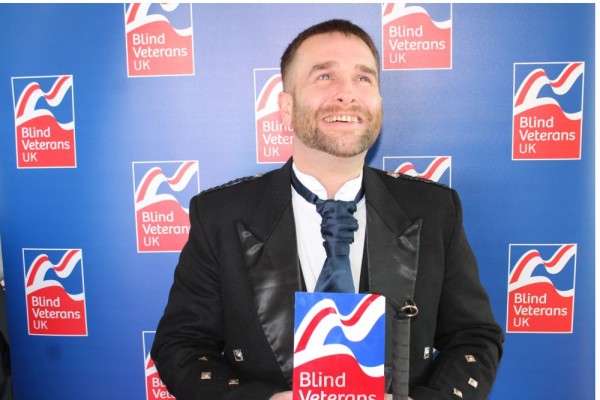 A blind veteran from St. Andrews has received a special award from military charity Blind Veterans UK for his outstanding achievements in rock climbing following his sight loss.

Garry says: “I was really humbled to be presented with this award, particularly because I know that without the support of Blind Veterans UK I wouldn’t be where I am today. I’m rarely stuck for words but when my community support worker Jan read out my nomination I can honestly say I was speechless.”

Jan Alpin, Community Support Worker at Blind Veterans UK, says: “Not only has Garry made incredible achievements in climbing since losing his sight, he has also become a dedicated advocate for Blind Veterans UK and seizes every opportunity to help raise awareness of the charity with those around him.”

Garry, who has no vision at all, was encouraged to take up climbing by staff at Blind Veterans UK’s training and rehabilitation centre in Llandudno. In just a year he transitioned from beginner level to competing in professional paraclimbing competitions, including the 2017 British Mountaineering Council’s (BMC) Paraclimbing World Championships.

Garry now has a sports scholarship from the University of St. Andrews, where he climbs several times each week, and trains regularly with his coach, champion rock climber Johnny Dawes.

Garry says: “Climbing is as much about mental strength as it is physical. It’s about tacking challenges head on, even when frustrated, and I think those lessons have stood me well both on the climbing wall and in my life more generally.”

Garry, who is originally from Northern Ireland, joined the Royal Air Force (RAF) in 2000 and served as an engineer, fixing and maintaining Tornado aircrafts. Just three years into his Service he suffered a life-changing injury when he broke his spine in two places during a parachute accident.

Garry says: “I completed 494 successful jumps before having one bad one. The impact broke my spine and I had to learn to walk again at the age of 23. It took 14 operations and four years of rehab for me to really get back on my feet.”

Garry was subsequently transferred to a less physically active role within the RAF and continued his Service until he was discharged as a Corporal in 2009. It was in 2016, when working long hours on offshore oil rigs, that he lost his sight due to chicken pox.

Garry says: “I was working crazy shifts and felt absolutely exhausted. I knew I was unwell but I’d had chicken pox as a child I didn’t take it seriously until my vision began to be affected.”

Garry went to his GP and was immediately referred to hospital. Within four days he lost the sight in his left eye and within two weeks he lost 95 per cent of the vision in his right eye. He eventually lost his vision completely.

Garry says: “I was devastated. There’s no other word for it. I’d always been independent and had absolutely loved my sports. The idea that I’d have to rely on other people to do things for me was frustrating, to say the very least.”

Garry began receiving support from Blind Veterans UK in 2016, and has since received training and equipment from the charity, as well as enjoying the camaraderie of meeting other blind veterans.

Garry says: “It was life-changing. A truly amazing experience. It sounds so daft, but being able to ask questions like, ‘How do you put toothpaste on your toothbrush?’ without fear of judgement, was fantastic.”

As for his next challenge, Garry says: “I’m aiming to perfect my technique and hopefully make it into Team GB paraclimbing in the future.”

“Every year we recognise the achievements of veterans like Garry who have really demonstrated the values we hold as a charity. Garry, along with the other nominees and winners are the shining examples of all that can be done to achieve victory over blindness.”