You are here: Home / News / News / Strictly’s JJ Chalmers and Vicki Michelle MBE announce the third group of winners of the 10th Annual Soldiering on Awards

We are very excited to announce the winners of the Business of the Year: Start Up, Scale Up and Community Impact awards in the third Soldiering On Awards 2020 (SOA2020) virtual ceremony. 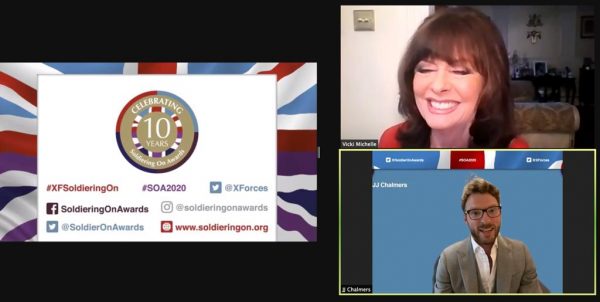 “Listen very carefully – I shall say this only once! I’m just so honoured to be part of Soldiering On, I’ve been there from the beginning, it’s the 10th anniversary. It’s so worthwhile that people who wouldn’t usually be recognised are recognised. Thank you to soldiering on for doing this because I think it’s so important, and I love it!”

Tribal Tracks was founded by ex-Army officer Charlie Richards who wanted to use her skills in the travel industry to provide people with amazing experiences across the globe.

“I remember the day that he was injured, hearing that information back as I had guys on the ground serving with him, but it wasn’t until years later when I was injured myself, and the lads of 45 [Commando] sent Baz to my front door to reassure me that actually there was a life beyond injury. And the moment at which – knowing how badly injured he’d been – as soon as I saw him standing in my front door, I knew everything was going to be alright, I knew there was a future.

“It’s great to take that natural inspiration he has, give it a business influence, which is also helping to develop and train other veterans.”

Turn to Starboard is the only Armed Forces’ sailing charity to use the therapeutic benefits of sailing to support service personnel who have been affected by military operations.

Its founder, Shaun Pascoe, served in the RAF for16 years before discovering the benefits of sailing whilst recovering from PTSD. Shaun was determined to share his love of sailing and change veterans’ lives. He has helped thousands of people since he set up the charity in 2012.

“This was our third digital winner ceremony and I would like to reiterate that, as with all the other categories that came before these, it is important to shine a light on all of our wonderful finalists. These individuals and businesses represent the very best of the best. Our Judging Panel had an incredibly difficult challenge in making their final decisions last November. The Business of the Year finalists and winners especially highlight the importance of recognising the contribution they make to the national economy. With the pandemic having had a considerable effect on many businesses, business owners and therefore employment, we together must stand to support and elevate these extraordinary individuals and the role they play in sustaining our future.

“I am very proud to be part of the Armed Forces Family and what we together stand for in this extraordinary year, which has kept many of us apart but has strengthened our resolve and really underlined the importance of our community.”

“We want to thank all of the judges and particularly the sponsors for continuing to support the Soldiering On Community; making sure that everyone’s experience this year is as special as we can possibly make it.”