You are here: Home / News / News / Superhero Vron’s all dressed up to raise smiles and pounds during chemo

Veronica ‘Vron’ Young of Moray is dressing up to raise money for charities close to her heart, while undergoing chemotherapy for an aggressive form of breast cancer. 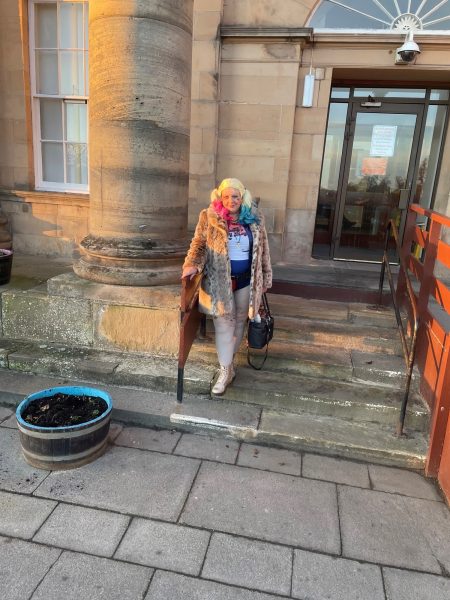 After receiving the shocking diagnosis on the tenth anniversary of the death of her father from bladder cancer, Vron (58) decided that some good should come of the situation. Always one to see the positive side of life, she came up with the idea of raising money by dressing as a different superhero for each of six rounds of chemotherapy.

For her fourth round of treatment Vron is raising money for the Royal Air Forces Association, by dressing as Harley Quinn, the Joker’s henchwoman. The charity is a favourite, as Vron was an RAF spouse for 20 years and she is secretary of the Moray Branch of the Association, among her other voluntary roles.

“Dressing up for my chemo has provided a great distraction, both for me and others. You wouldn’t expect to see a Christmas elf, Batwoman or Superwoman anywhere in a hospital, let alone at a chemotherapy session!

“As well as being secretary of my local branch, I am an RAF Association Connections for Life volunteer. This welfare service fights loneliness with friendship and I call six RAF veterans about once a month for a chat and to see how they are. I also call two more vulnerable veterans every week. It’s a simple, but powerful way to help the RAF community I’ve been a part of for so long.”

If you would like to show your support for Vron, you can donate to the RAF Association by visiting www.justgiving.com/fundraising/veronica-young4