Staff at Royal Star & Garter in Surbiton have enjoyed a week of treats, pampering and a lot of TLC. 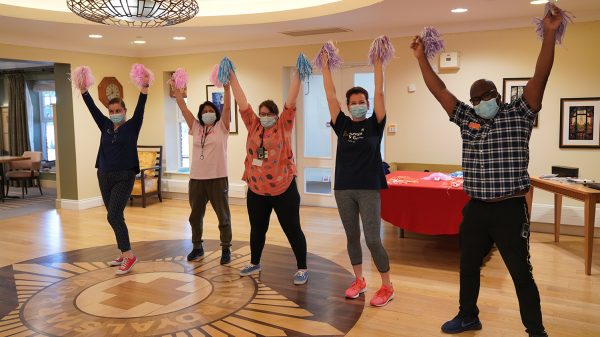 They were just some of the events and activities which took place during the Surbiton Home’s Staff Well-being Week. It ran from 26-30 April and concluded with staff enjoying a Caribbean-themed party and barbecue with residents. Staff were later given a goody bag from Royal Star & Garter.

The charity provides loving compassionate care to veterans and their partners living with disability or dementia.

Several of the events took place in the evening, to ensure night staff were not left out.

“This is just a small token of thanks for all their courage, commitment and hard work, especially during the pandemic, when we’ve faced some really tough and demanding times. It’s a small gesture when you consider all they do. They are amazing and deserve it.”

Anna, a Nurse at the Home, said:

“I’ve been to laughter yoga, had an Indian head massage, shoulder massage, and spoken to the optician. It’s been a really nice week. It’s always nice to be appreciated, and we really enjoyed being pampered and spoiled.”

The cost of the barbecue was covered by a staff fund, which included generous donations from residents’ relatives over the past year. The son of a resident who died earlier this year also donated money for a steel band to play in memory of his mother.

The charity holds awards ceremonies for long-serving staff, in recognition of their years of dedication and hard work. Lead Healthcare Assistant Emrys Owen is the longest serving member of staff, having joined in 1982. He was awarded a British Empire Medal the New Year’s Honours list for services to Veterans during Covid-19.