Taken on Trust: awareness and effectiveness of charity trustees in England and Wales

Research into awareness and the effectiveness of charity trustees in England and Wales. Also includes Charity Commission response and provider perspective.

Follow this link to the reports and the Charity Commission response.

Taken on Trust: The Awareness of Charity Trustees in England and Wales
The new report (launched November 2017) in partnership with the Worshipful Company of Management Consultants provides the most comprehensive picture of trusteeship in a generation, and recommends that charity boards do more to promote diversity and encourage applications from trustees from non-traditional backgrounds.

The research also finds that charity trustees, who are overwhelmingly volunteers, feel positively about their role and about the personal reward and satisfaction it gives them. It also highlights that trustees’ contribution to charities amounts to a monetary equivalent of around £3.5 billion a year.

We surveyed a random sample of 19,064 trustees, via a national survey in January 2017. The survey showed that the number of active charity trustees in England and Wales is around 700,000 – significantly fewer than the commonly reported figure of 950,000.

The report, which was commissioned by the Charity Commission and the Office for civil society, found that men outnumber women trustees on boards by two to one, a finding which was reflected in the role of the Chair and Treasurer. The majority of trustees tend to be white British, older and above average income and education. 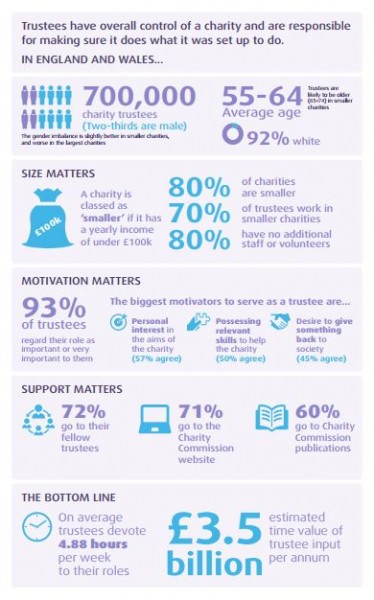