You are here: Home / News / News / Thank you to our Judges

Thank you to our Judges

The tough task of selecting the Finalists and Winners for the 2020 Soldiering On Awards has been carried out by our two sets of independent judges.

The 20 first round Category Judges did a fantastic job of reviewing and scoring a record-breaking number of nominations. This initial process was followed by our final set of Judges meeting recently, having completed a second round of independent evaluation and scoring. Their discussion to agree on the Finalists was chaired jointly by General the Lord Dannatt GCB, CBE, MC, DL, and Debra Allcock Tyler, CEO of the Directory of Social Change.

This has been an incredibly hard task for everyone concerned. The high standard of nominations, and the extraordinary people and accomplishments that have been presented to us this year are truly remarkable. In our eyes, every single nominee deserves praise for what they have achieved.

We are supremely grateful for the time and support all of our judges have so generously given. The Co-chairs of Judges said…

“As President of the Soldiering On Awards I would like to thank everybody involved with this highly worthwhile project… I’d like to thank all the judges who’ve given their time to select the winners; very difficult job. But I would particularly like to thank all those that support the Armed Forces Community in the widest sense, whether it’s charities, businesses, individuals or local authorities. The AFC has very special needs; we do our best on behalf of the nation, but we are really grateful when the nation does its best on behalf of us. So, thank you.”

“I absolutely love judging the Soldiering On Awards, but I have to say it’s an exhausting process! We really, really take it tremendously seriously and we have incredibly lively and strong debates between all of the judges. It’s particularly difficult in a year like this year, where we’ve had some absolutely outstanding entries, where sometimes it was so close it took a lot of argument to decide who was going to be the overall winner. But more importantly than nominations, the people who nominate for these awards – thank you so much for doing that.”

Click here to see the full list of judges and for details of how you can secure your ticket or table to join us on Awards night 24th April 2020. 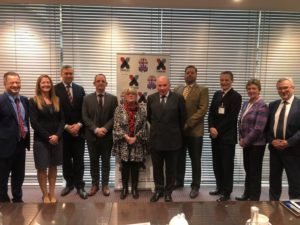 Lt. Col. Ren Kapur MBE, Founder and CEO of X-Forces Enterprise CIC and Co-chair of the Soldiering On Awards said:

“I am always humbled by the amazing people that comprise the Armed Forces community. With that unique set of values and can-do attitude and spirit of leave no one behind, that has shone out across all of the nominations received this year. This has presented our independent judges with the most difficult task in another record-breaking nominations year! My thanks go to Co-chairs of Judges, General the Lord Dannatt and Debra Allcock-Tyler, CEO Directory of Social Change, along with their fellow judges, for the diligence and dedication they have applied to deciding who will be the 2020 SOA Finalists and overall Winners.”

Finalists’ Reception at the House of Lords

Each Finalist and their nominator will receive an invitation to join us at a private reception at the House of Lords in February to congratulate all Finalists for their achievements.

Early next year we’ll be inviting you to take part in the two categories that are awarded based on a public vote: The People’s Choice Award and the Animal Partnership Award. Details will follow very soon, so do keep an eye out on social media or sign up for our newsletter.

Thank you to all nominators

Each year we hear from nominees about how very special they felt that someone appreciated them enough to nominate them. Thank you to all nominators, for being that person.

If it turns out that you nominated someone who hasn’t been successful in becoming a Finalist this year, please don’t be disheartened. The number and quality of nominations we received was awesome and we hope you will consider nominating again.

If you would like to find out more about the Soldiering On Awards judging process, click here.