You are here: Home / News / News / The Blitz 80: WWII veteran recalls dead in school playground as bombs rained down on Birmingham

The Blitz 80: WWII veteran recalls dead in school playground as bombs rained down on Birmingham

The Blitz in Birmingham has been recalled by a WWII veteran living at Royal Star & Garter, ahead of the 80th anniversary of the raids. 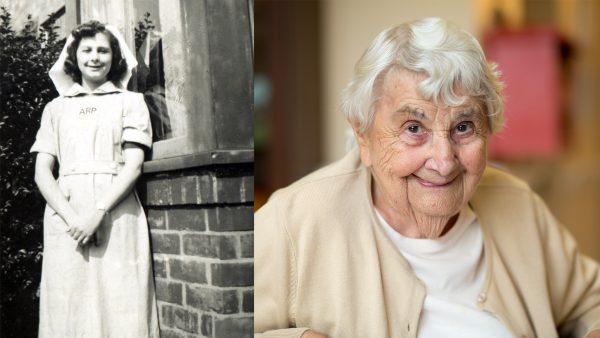 Joan Sprigg was serving in the Air Raid Precautions (ARP) during the bombings, before later joining the Auxiliary Territorial Service (ATS).

She recalled “night after night of relentless bombing” and the awful devastation caused to the city. The Blitz began in London on 7 September, 1940.

Speaking from Royal Star & Garter in Solihull, where she now lives, the 96-year-old revealed she lied about her age to join the ARP.

“I was 15 going on 16 and I lived in Birmingham and I was anxious to play a part. And you had to be 16 to join the Air Raid Precautions. So I’m afraid I told a little fib and upped my age by a couple of months and said I was 16.”

She did first aid and home nursing training and after passing exams, was placed at a first aid post in Bordesley Green.

“It was situated in a school and was fitted out to deal with casualties. And we had plenty of those when the air raids started in 1940,” she recalled. “It was night after night of relentless bombing. We received a terrible, terrible pasting.”

The air raids were terrifying:

“They used to start quite early, and they would sometimes go on for 13 hours. They made a terrific noise. The floor beneath us shuddered. We held our breath. There was a giant roar and we were all quieted. The guns opened up, heavy guns which positively thundered. Bombs screamed and exploded, the place shook.”

It was Joan’s responsibility to administer first aid and make comfortable the more serious patients whilst they waited for transport to hospital for further treatment. She continued:

“We had a lot of dead who we used to lay out in the playground. There were ever so many dead. It was horrendous, quite horrendous.”

But Joan managed to remain resilient and defiant: “Although I was very young somehow you coped, you got through it. The morning after an air raid, you would pick your way through the debris, but there was never a thought of giving in. Capitulation wasn’t a word we recognised.”

She said Birmingham was in the Nazi’s crosshairs because of the crucial role it played in the war effort:

“Birmingham was certainly a target because the whole of the city was turned over to war work. All the factories were producing armaments of different kinds and of course the Spitfire was manufactured in Birmingham, so I suppose we were a legitimate target. But it was dreadful, the city took a pounding. But it never got a great deal of publicity. It was as if the authorities didn’t want the Germans to know what destruction they were inflicting on us. So Birmingham used to be referred to as “a Midland town”, not even a city!”

Joan continued serving in the ARP until in 1942, aged 18, she joined the ATS. She served in the 2nd Anti-Aircraft Group Command at RAF Uxbridge, where she worked as a secretary. She left in 1945.

Royal Star & Garter is a charity which provides loving, compassionate care to veterans and their partners living with disability or dementia, from Homes in Solihull, Surbiton and High Wycombe.