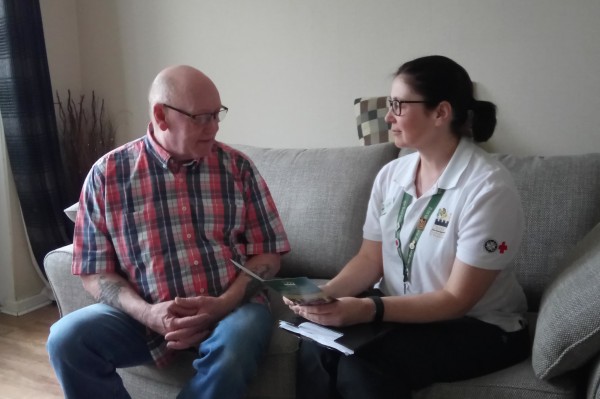 When 65 year old veteran Ken lost his eyesight temporarily, he and his wife Gina found help from several organisations, including the Defence Medical Welfare Service, within the Unforgotten Forces Project.

Ken served in the Royal Regiment of Fusiliers for 4.5 years before he left the service in 1977. After his army career Ken and his wife Gina successfully ran their own pub. Unfortunately, in 2008 Gina had an accident and developed Myelopathy, a degenerative neurological condition related to the spinal cord, which leaves her in a lot of pain. Her condition means that she uses a mobility scooter and is partly dependent on Ken to help her around the house. Despite the help, Gina had several falls and there is a need for house adaptations to make it safer.

A few months ago Ken had to go to hospital for routine treatment to help with his detreating eyesight (Macular Degeneration). Unexpectedly, Ken lost his eyesight temporarily after the treatment. Gina contacted SSAFA, the Armed Forces charity, to find out what kind of support is available to them. SSAFA advised Gina to contact Fares4Free, a charity that encourages taxi drivers to give up to 4 of their fares every month to help veterans, so that she could visit Ken in hospital. SSAFA also provided some future transport funding if they needed to return to hospital. Fares4Free referred Gina to our charity, the Defence Medical Welfare Service (DMWS) who has been supporting the Armed Forces community when they suffer from physical or mental illness since 1943.

Our Welfare Officer Emma, a veteran herself, soon established a good rapport with Ken.

Her early assessment of the couple’s wellbeing needs found that Ken was understandably frustrated about his recent medical treatment which meant he could no longer drive and go out, making him feel isolated and depressed. His illness had a direct effect on his wife Gina, who started to feel stressed and upset.

To help with their recovery we are delighted that Fares4Free referred the couple to Poppy Breaks which has given them funds towards a holiday plus spending money.

Fares4Free, SSAFA, Poppy Scotland and our welfare officer Emma have made a real difference to the couple. Ken said: “I don’t know what I would have done without Emma from DMWS and the Unforgotten Forces project. If it wasn’t for the initial contact with SSAFA, we would not have had any support. I hope more people will hear about the project to receive this fantastic support.”

This Case Study showcases the benefit of the Unforgotten Forces project: organisations work together for a common goal: to support those who serve.

Unforgotten Forces is a partnership between 15 leading organisations delivering a range of services and enhancements for older veterans and their families living in Scotland. They cover areas including advice, access to healthcare, social isolation, respite, along with creative activities and events for those in care settings.

Unforgotten Forces is comprised of the following organisations:

The St John and Red Cross Defence Medical Welfare Service (DMWS) has been providing a person-centred medical welfare service to the Armed Forces Community since 1943. In that time we have supported over 1,000 000 patients and their families, ensuring that no one goes through the worry of injury and illness alone. Our highly trained welfare officers provide practical and emotional support to those receiving medical treatment. Recent new projects with organisations such as the police, the NHS and the probation service demonstrates the broad appeal of the organisation and its application to a wide set of frontline services. We are available 24 hours a day, 365 days a year. www.dmws.org.uk