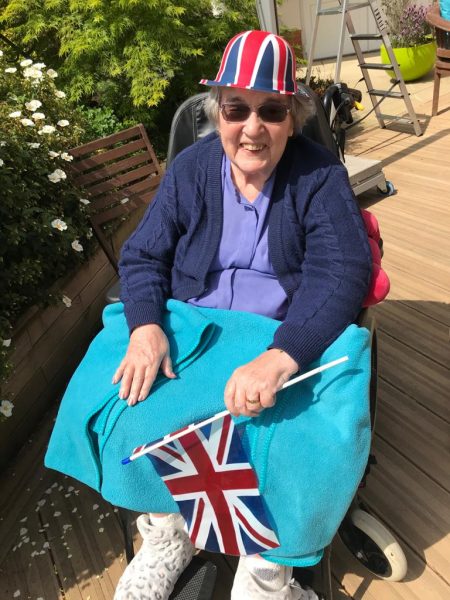 During the day, residents joined in with the national singalong of We’ll Meet Again, and took part in the Nation’s Toast to the Heroes of World War Two, where they raised a glass and said: “To those who gave so much, we thank you.” They also observed the two-minutes’ silence and tuned in to see Her Majesty The Queen, the Royal Star & Garter’s patron, address the nation.

Royal Star & Garter provides loving, compassionate care to veterans and their partners living with disability or dementia, including men and women who were in active service during the Second World War.

The celebrations were supported by ABF The Soldiers’ Charity, who covered the costs of bunting and goody bags in Royal Star & Garter’s three Homes in Solihull, Surbiton and High Wycombe, and provided biscuits, cakes and chocolates.

“We would like to thank ABF The Soldiers’ Charity for their continued support of Royal Star & Garter. They really helped the veterans in our Homes to feel part of the commemorations taking place up and down the country.”

“The coronavirus might have made it a little harder to commemorate VE Day this year, but ABF The Soldiers’ Charity has been delighted to partner with Royal Star & Garter to ensure that our elderly veterans could enjoy a celebration. We want to do our bit to boost morale at this trying time and to help bring a smile to as many veterans’ faces as possible on VE Day. On 8th May, we remembered the loss of so many who fought for our freedom while also paying tribute to those who serve today.”

The three Home Managers said afterward that they were delighted the landmark anniversary could be marked.

“We could not celebrate the 75th anniversary of VE Day as we had planned, but it was important to the residents that we did something to mark the day which holds so many memories for our residents.”

“Many of our residents remember 8 May, 1945. They were either serving, or knew people who had served during in the war. Some knew people who paid the ultimate price. So it was important to not only celebrate the end of six years of war in Europe, but to also take time to remember those who lost their lives.”

And Helena Maher, at Surbiton said:

“Just a few months ago, we never thought we’d be commemorating VE Day like this. But it was a special day which allowed all of us in the Home to remember the sacrifices made by the World War Two generation.”

Residents from the three Homes were also pleased VE Day was marked. A veteran from Solihull said:

“It doesn’t seem real that it’s 75 years. It was such a special day, and it’s wonderful that despite everything that is happening in the world right now, we were able to take part in commemorations on the day.”

“While it is a day of celebration, I was glad we observed the silence too. Because a lot of people lost their lives fighting for the freedoms we enjoy today.”

And a High Wycombe ex-serviceman added:

“It’s amazing that despite all the challenges staff are facing here, they still managed to deck the Home with bunting and decorations so that we could feel part of this special day. Nothing is too much for them.”

About ABF The Soldiers’ Charity

ABF The Soldiers’ Charity is the Army’s national charity, formed in 1944 to provide a lifetime of support to soldiers, veterans and their families when they are in need. In the past year, it has helped 70,000 members of the Army family in 62 countries across the globe and funded 89 other charities and organisations to deliver specialist services. One of these 89 charities was Royal Star & Garter, which was awarded a grant of £102,000 in the financial year 2019-2020 to support its veterans.