You are here: Home / News / News / Veteran, Brian Wood, completes 635-mile challenge to commemorate British Soldiers who died in Afghanistan and Iraq wars and raises over £143,000 to support Walking With The Wounded

Veteran, Brian Wood, completes 635-mile challenge to commemorate British Soldiers who died in Afghanistan and Iraq wars and raises over £143,000 to support Walking With The Wounded 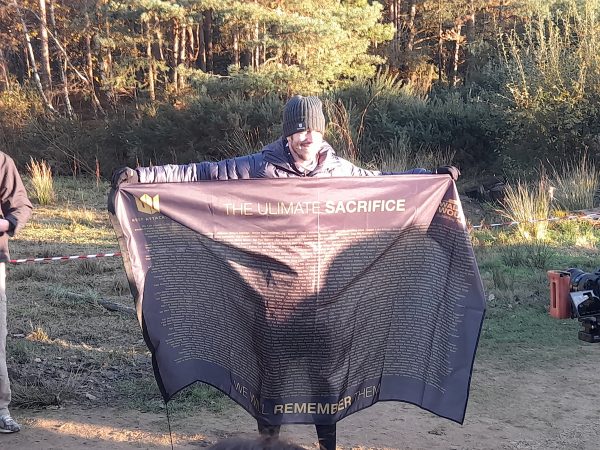 On 25 November, Brian Wood MC, completed his Ultimate Sacrifice Challenge, having run 25 marathons in 25 days to raise money to support Walking With The Wounded and those who served. He was joined by Walking With The Wounded (‘WWTW’) CEO, Fergus Williams, who presented Brian with a flag featuring all the names of the Armed Forces personnel who died during the Iraq and Afghanistan conflicts.

Brian’s Ultimate Sacrifice Challenge initially aimed to raise £20,000 for WWTW but thanks to the generosity of hundreds of supporters, his fundraising total currently sits at just over £143,000.

Commenting on the challenge, Brian said,

“When I started this challenge 25 days ago, I knew that it would be tough and there would be times when I had to keep my head up and keep attacking. The enormity of what I have achieved has not yet sunk in. It was an honour to run with the names of the 635 soldiers who died during the Iraq and Afghanistan conflict on my shirt, and it really hit home when people recognised names on the shirts.

“I set out with the aim of raising £20,000 to support Walking With The Wounded and those who served and thanks to the incredible support from the British public, the Ultimate Sacrifice challenge has so far raised almost £143,000 which is astonishing. Thank you to everyone who has donated, shared the fundraiser with their friends and family, run alongside me and cheered me on to the finish line. This has been a humbling experience and one I will never forget.”

Fergus Williams, CEO of Walking With The Wounded, added,

“Brian has completed his Ultimate Sacrifice challenge and in doing so, he has paid homage to those who gave their life to serve our country. Next month marks 10 years since the war in Afghanistan so this is a particularly poignant moment. We at Walking With The Wounded are incredibly grateful to Brian for taking on this challenge in support of the Charity. Seeing the support from the public has been humbling and every donation given, no matter how big or how small will go towards our support programmes and will make life-changing differences to the lives of those who served and their families. Thank you.”