Armed forces veteran Gary Perriton is on track to complete his 650-mile solo bike ride of the entire Welsh coastline, with the aim of raising awareness of homeless veterans. 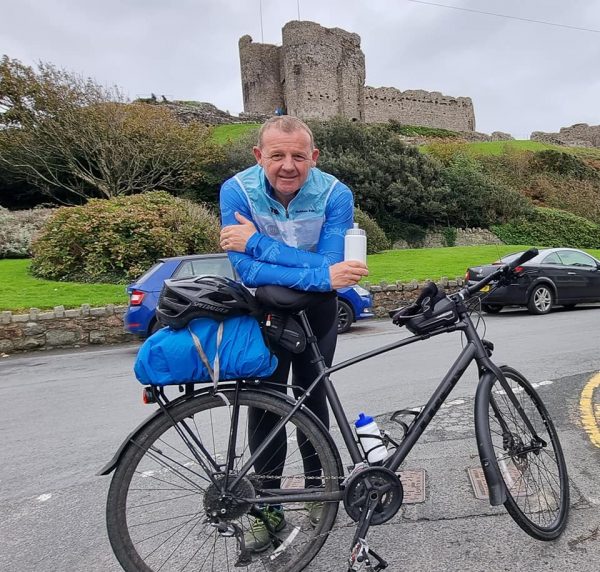 Gary from Llangollen in Wales, started his journey from Chepstow on Monday 18 October and will complete his challenge in Chester tomorrow, Friday 29 October where he is expected to arrive at Chester Cathedral at 2pm.

Although he has completed the challenge on his own, he will be joined on the final few miles by some of the resident veterans and staff at Launchpad’s Speke House.

The resident veterans, who themselves were homeless until they found Launchpad, will meet Gary at Flint Castle and accompany him on his final few miles into Chester. They will be cycling on the bikes that Launchpad purchased thanks to funding secured by the British Forces Broadcasting Service (BFBS), as part of its annual Big Salute campaign.

Gary, a Royal Navy Reservist who served 34 years in the Royal Navy, has cycled the entire Welsh coastline in 11 days (on the road) and at times, battled winds of up to 50mph, horizontal rain and hailstones but continued with his challenge of raising awareness of homeless veterans and funds for his two chosen charities – Launchpad and the Royal British Legion.

Veterans’ charity Launchpad provides accommodation and support to veterans to help them stabilise their lives and make a successful transition from military to civilian life. The charity has two houses in Liverpool and Newcastle upon Tyne and Launchpad has supported over 525 veterans since it opened in 2013.

The Royal British Legion (RBL) has been celebrating its 100th Anniversary throughout 2021 with a special programme of activity, paying tribute to those who have contributed to its history and celebrating with the communities across the UK and around the world.

Thanks to help from family and friends and businesses that attended the BITA Liverpool networking lunch event last Friday, he has raised over £2,500. He is also raising funds via an online auction, which includes a Liverpool FC shirt signed by Sir Kenny Dalglish, a Cardiff Blues shirt signed by the team, a game of golf for four at Vale of Llangollen golf course and a vintage bottle of port.

You can support Gary via his fundraising page at Just Giving at: https://www.justgiving.com/fundraising/garyperritoncycle