You are here: Home / News / News / Veteran recalls King George VI’s final journey on the 70th anniversary of his death

A former Grenadier Guard has recalled the role he played in the funeral of His Majesty King George VI, ahead of the 70th anniversary of the monarch’s funeral. 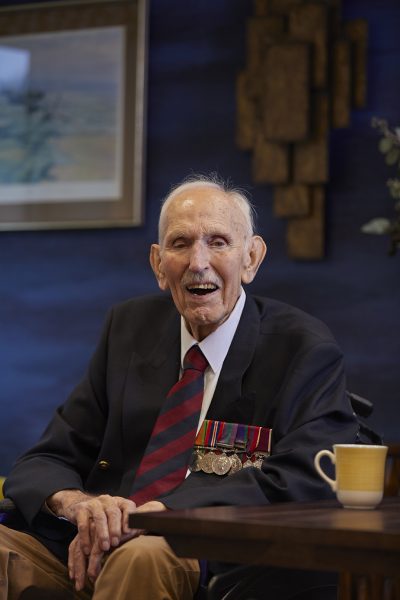 John Walmsley was a Sergeant in the King’s Company stationed at Victoria Barracks in Windsor, and in charge of escort detachment, when word came through that the King had died at his estate in Sandringham, on 6 February 1952.

The 95-year-old is now a resident at Royal Star & Garter’s High Wycombe Home. The charity provides loving, compassionate care to veterans and their partners living with disability or dementia.

Aged 25, he accompanied the King’s coffin from a train station at Windsor, to the castle, and into St George’s Chapel, on the day of the funeral on 15 February 1952.

“In those days there were two stations in Windsor, and the train carrying the King came into the top station, near the castle. As soon as it arrived, I was there, as part of an escort which also included the Navy. We escorted the coffin, walking on either side of the gun carriage, all the way from the station into Windsor Castle itself and towards St George’s Chapel, ready for its burial. I had 15 men on one side, 15 on the other and that was my little detachment.”

But there were then tense moments when the coffin arrived at the chapel.

“The steps to St George’s Chapel are very steep, and the coffin was lead lined, so the lads who were carrying it had to practice in advance with weights inside it, to make sure they were prepared,” said John. “The coffin was walked up the chapel steps by the four men on either side. These men were strong and strapping, but the coffin was very heavy, and as they walked up the steep steps, it sloped a lot, and the boys were struggling with it. So the Warrant Officer behind it had to push the back of the coffin, by just easing it forward, up with the boys. We also had to adjust our march to the shuffle of the men who were carrying it. When the coffin went into the Chapel that was the end of the responsibility for us.”

“It’s a strange feeling, especially with the public all around you, and you’re aware that you’re taking part in a moment of history. But when you’re serving, you’re on duty, and it’s all planned and timed.”

John joined the Grenadier Guards in 1944, and served until 1967, rising to the rank of Regimental Quartermaster Sergeant. He served in post-war Germany, Palestine and Malaya.

Her Majesty Queen Elizabeth II, who is Royal Star & Garter’s Patron, succeeded to the throne following her father’s death. John also took part in her Coronation ceremony, on 2 June 1953.

The Queen’s Platinum Jubilee celebrations are taking place this year, culminating in a four-day bank holiday at the beginning of June to mark her 70 years on the throne.

Royal Star & Garter also has Homes in Solihull and Surbiton, and is welcoming new residents. For more information and working for the charity, go to www.starandgarter.org