You are here: Home / News / News / Veteran with PTSD creates and launches journal at the start of Mental Health Awareness Week

A cognitive behavior therapy journal has been created for veterans in aid of SSAFA, the Armed Forces charity. 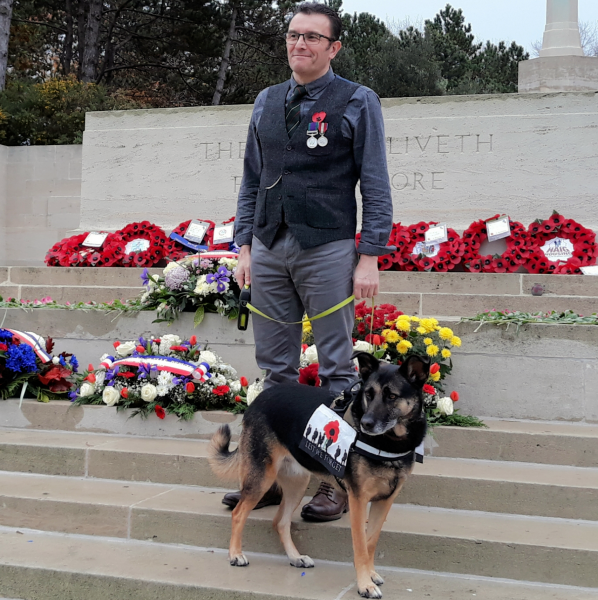 For Mental Health Awareness Week, veteran Darren Finley has produced a Veterans Journal. This journal uses the SITREP format that Darren developed whilst taking part in cognitive behaviour therapy. He started this veterans journal as alternative gratitude journal, to help journal to what was going on inside his head.

Darren struggled with depression for a long time. In 2015 someone very close to him passed away and although undiagnosed at the time, this triggered his PTSD and anxiety. Darren could no longer cope with the responsibility, regular exposure to stress and trauma from his job and resigned from his job as a British Transport Police Officer.

Six months on, his life became even more of a struggle. Darren was living in a tent and working as a campsite warden to pay for his pitch, electricity, and debt that he had unknowingly accrued.

His PSTD went undiagnosed for six years, until eventually when taking part in Cognitive Behaviour Therapy. Learning how to journal here proved a successful way to keep a running log of what worked and did not work when the darkness set in.

His creation combines a journal, an aide-memoire and a daily diary/planner to help keep your life organised.

Feelings can overwhelm those with PTSD and mental health issues as it can feel if there is no way to organise your thoughts. Brain dumping and getting the day’s events into this journal will help the user understand what is going on in their head. Because even occasional SITREPS can be stress relieving when focusing on emotional processing.

“SSAFA’s support was instrumental in me turning my life into one I can now feel happy about. The only way I know to thank them, other than words, is to raise funds and share some of the methods I’ve used to survive and thrive with PTSD.

The SITREP Veterans Journal is an amalgamation of those methods in a format other Veterans will understand. Even if only a few pounds are raised from the journal, I hope that many people will see how amazing SSAFA is and that they really are there for people like us when we need it most.”

“On behalf of SSAFA I would like to extend our thanks to Darren. Firstly, for creating such a useful tool for people to use in dealing with mental health issues and the many challenges they face. Secondly, we are grateful for the financial support this initiative will give SSAFA. Darren has created a journal that anyone can use. It is based on his own experiences and has a format recognised and endorsed by mental health professionals.

From a personal point of view as a veteran – I would like to thank Darren for his selfless efforts in the creation of Sitrep. I have many close friends who have struggled since leaving the forces. I am sure this book will help them and others like them.”

The Journal is endorsed by SSAFA and the foreword is by Colin Maclachlan – SAS veteran, author, motivational speaker and TV presenter.

Darren is aiming to raise £500 in profits through the sales of the journal during Mental Health Awareness Week. All profits will be donated to SSAFA on close of play Friday May 16. You can purchase the journal from amazon:  amazon.co.uk/dp/B093K83SYC