You are here: Home / News / News / Veterans meet their Penpals

Veterans at The Royal Star & Garter Homes in Surbiton and pupils from Hinchley Wood School have become penpals in an initiative to get generations writing to each other run by It’s not Your Birthday But.

Glitter pens and fountain pens in hand, the 12-year old pupils and the residents, who are mostly in their eighties, have been sending letters and postcards to each other throughout February, sharing the stories of their everyday lives and discovering that they had a great deal in common. 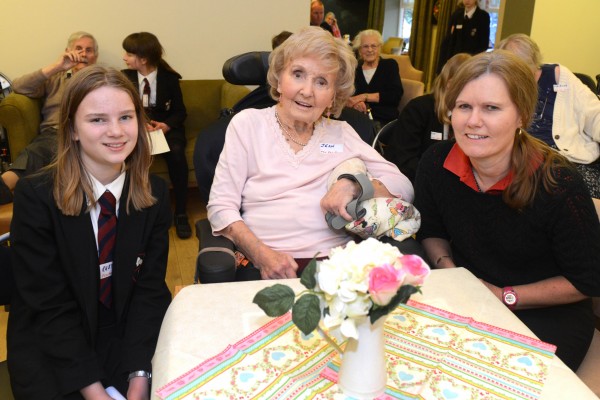 After a flurry of letters, the residents finally met their young correspondents at a tea party held at the Surbiton Home on Friday 3 March, where they chatted about their shared experiences. When student Ruby complained in a letter that the teachers checked on her skirt length, her penpal Jean, aged 94, reassured Ruby that it was the same in her day! Jean commented: “Talking to my penpal Ruby was a delightful experience. We compared our school days and we found some similarities and some differences – like she likes going to school and I didn’t!” 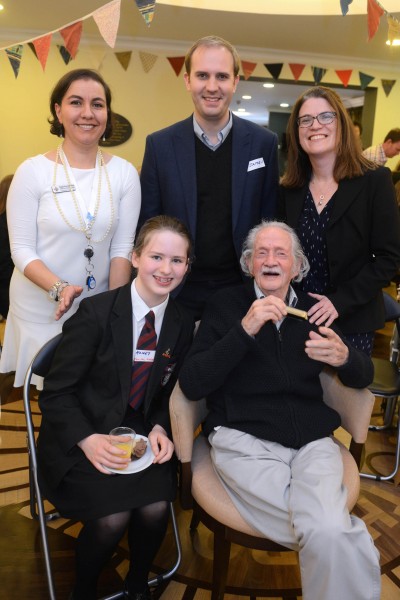 Army veteran Nobby, who is 91, discovered a shared love of the harmonica with student Honey through the exchange of letters. When the pair finally met at the Meet your Penpal event last Friday, Nobby treated Honey and the other penpals to an impromptu recital, to great applause.

Kingston and Surbiton MP James Berry attended the event and was delighted with the initiative: “What a fascinating project. This is a wonderful way for different generations to communicate and develop an understanding and respect for one another’s lives. It was great to see our Star & Garter residents sharing their lifetime of experiences with children from Hinchley Wood School.”

Funded by the Arts Council, the project It’s not Your Birthday But is the brainchild of Wendy Smithers who, inspired by letters from her own grandmother, encourages people to communicate and share the pleasure of exchanging letters.

The stories that the letters reveal have been documented as poems by Tom Mallender of Write-London, which are then sent to other poets to develop. The poems will be collated into a book later in the year.

It’s Not Your Birthday But initiative strives to get more people writing, reading and sending letters and postcards. www.itsnotyourbirthdaybut.com

The Royal Star & Garter Homes is a charity founded in 1916 to care for the severely injured young men returning from the battlegrounds of the First World War. Today we provide specialist care to the whole military family in our friendly, state-of-the-art Homes. Disabled ex-Servicemen and women, and their partners, can all benefit from our pioneering approach to nursing, dementia and therapeutic care.

Anyone who is physically disabled or incapacitated and has served in Her Majesty’s Forces is eligible to apply for a place in one of The Royal Star & Garter Homes, as well as the partners of ex-Service people.

We are in the process of building new Homes around the country to provide specialist nursing care for disabled ex-Service people in the best modern surroundings, including dementia care facilities to address this growing need. The first of these prestigious new Homes opened in Solihull, West Midlands, in the autumn of 2008 and has already established itself as a centre of excellence. The state-of-the-art facilities at Solihull have been emulated at a second new Home in Surbiton, Surrey, which opened in August 2013 and which will also enable the Charity to offer interim care for young disabled Service personnel. Following the successes of the first two Homes, a third Home in High Wycombe, Buckinghamshire, is being built, with a planned opening in 2018.