Up to 60 pupils from Byker Primary School in Newcastle welcomed special visitors in class this week to learn about Armed Forces Day. 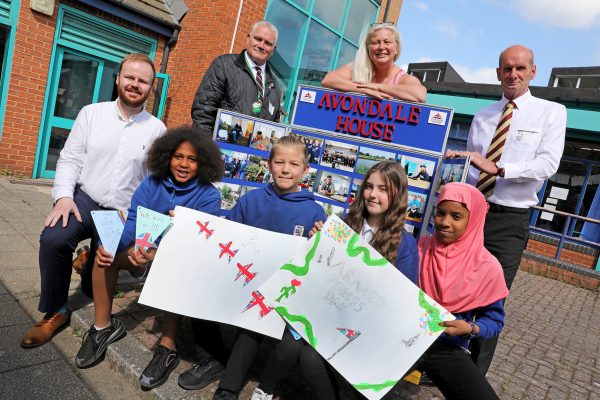 Staff and one of the veteran residents from nearby Avondale House visited the school this week to talk to two Year 6 classes to inform them about Armed Forces Day.

Armed Forces Day will be held this Saturday, 26 June and is a chance for the nation to celebrate and show our support to the men and women of the Armed Forces who have served for their country, past and present.

Phil Thompson, Manager of Avondale House who served 31 years in the British Army, organised the visit with his staff and residents to talk about life in the military and why we celebrate Armed Forces Day. It was also an opportunity for the children to speak to the veterans and ask questions.

Thanks to funding from Karbon Homes, they were invited to make bunting, write thank you cards and design toppings for a celebration cake that will be presented by some of the children to serving personnel at The Fifth Battalion, The Royal Regiment of Fusiliers this Friday, 25 June, to show their appreciation.

“We love going into the schools and talking to the children about Launchpad and to raise awareness of important days such as Armed Forces Day. We haven’t been able to do that recently because of Covid but, this year we were able to make this happen.

“We wanted to engage with local schools and as many pupils as possible to explain the importance of Armed Forces Day but also invite them to participate in some fun activities. They also asked us some really good questions and it was nice to hear some of their parents and extended families are currently serving or have served for their country.

“These events are important dates throughout the year to remember and celebrate and engaging pupils in practical activities is a great way of showing their appreciation to the armed forces community.”

“Our children really enjoyed the activities designed by Launchpad and to learn about the armed forces and engage with veterans who they are likely to see in their local area.

“It is important for our children to be able to engage with groups in the local area and address any misconceptions such as ‘all veterans fought in World War Two’. They appreciate all those who are serving (and previously served) and it is the communication with the forces staff that will be the most rewarding.”

“My mam used to be a medic in the Army and her boyfriend was a soldier, so he has shown me all his medals. I’ve really enjoyed listening to the talks today and making the bunting.”

“My mam was in the Navy for 7 years and we always pay our respects on Remembrance Day but I didn’t know much about Armed Forces Day so it was really interesting. I’ve enjoyed the talks and activities.”

Staff from Avondale House also visited Ponteland Academy this week to talk to Year 6 pupils and participate in the fun activities.

Launchpad’s Avondale House is the North East’s largest veterans’ accommodation comprising 33 one-bedroom self-contained flats. The charity provides accommodation and a wide range of support, with the help of specialist providers, to residents and their partners to help them make a successful transition to civilian life.

Since 2013, Launchpad has supported 517 residents (as of 21 June 2021) from its two houses in Newcastle upon Tyne and Liverpool.