You are here: Home / News / News / Vice Admiral Sir Ben Key KCB CBE has been appointed to First Sea Lord and Chief of the Naval Staff

Defence Secretary Ben Wallace has confirmed that Her Majesty the Queen has approved the new appointment of First Sea Lord and Chief of the Naval Staff. 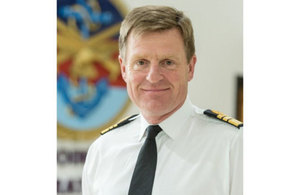 “I am delighted to congratulate Vice Admiral Sir Ben on his appointment to First Sea Lord and Chief of Naval Staff. Sir Ben Key is an exceptional military officer and I have no doubt he will be outstanding in his new post.

“As the current Chief of Joint Operations, Vice Admiral Sir Ben was one of the key architects of the incredible Op Pitting rescue mission, which weeks ago saw the successful evacuation of over 15,000 British nationals and Afghans from Kabul.

“Every day the threats to the UK and our allies multiply, that’s why this Government has made the biggest investment in the Armed Forces since the Cold War, so that we can modernise to meet that threat head on.

“Under Vice Admiral Key’s leadership, the Royal Navy and Royal Marines, are in excellent hands.”

“I am very pleased to welcome Vice Admiral Sir Ben Key as the next First Sea Lord. As a previous Fleet Commander and the current Chief of Joint Operations, he will bring a wealth of operational experience to the role. He will continue the modernisation of the Royal Navy to help ensure we can meet future threats and deliver for the Nation.

“We live in a period of enormous change and I am delighted to be working with Sir Ben in my new role as Chief of the Defence Staff to ensure the Royal Navy and the rest of Defence are a global force delivering for Global Britain.”

“It is an honour and privilege to be selected as the next First Sea Lord. I am excited at the prospect of leading the exceptional sailors and marines of the Royal Navy through the exciting challenges we have ahead.’

“I look forward to building on the transformation work of my predecessor Adm Sir Tony Radakin and continuing the ambitious modernisation laid out by the government in the IR.

“I have seen close up, as the Chief of Joint Operations, the impact our increasingly globally deployed Navy has had. I am determined we continue to deliver on these opportunities, working with allies and partners around the world in support of the government objectives.’”