You are here: Home / News / News / Volunteers from the Taxi Charity for Military Veterans  joined Roy Maxwell and his family and friends on Sunday 20 February to celebrate his 100th Birthday

The surprise party for Roy was held at the Player’s Golf Club in Codrington on Sunday the 20 February, the day before his 100th Birthday. 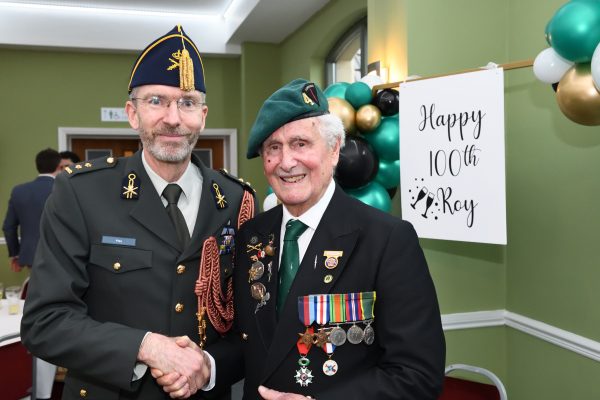 Roy was born in Rhyl, North Wales on 21.2.1922 and was brought up on his Grandfathers Farm. He married Tegwedd and they had a daughter Jane. In 1976 Jane had Roy’s granddaughter Bianca in Iran and Roy and Tegwedd travelled out to spend a month with them.

Roy Maxwell was part of No4 Commando, who in June 1944, as part of the 1st Special Service Brigade, landed on Sword beach. After the war Roy had a series of jobs working with his brother in law in construction, a garage, a department store and a builders merchants. When the builders merchants was sold to Jewson’s Roy stayed with them until he retired.

In later years when Tegwedd’s health did not allow her to travel, Roy enjoyed many holidays with his cousin in Spain and when he was 87 he made his first trip to Australia, travelling on his own to see an army buddy from No 4 Commando, a trip he made every year until he was 97.

Roy really enjoys his involvement with the Taxi Charity for Military Veterans and was delghted to see so many of his friends from the charity at his party.

“Despite the atrocious weather it was lovely to see that so many friends and family had travelled from all over the country to celebrate with Roy. On behalf of the Taxi Charity, I was delighted to present Roy with a framed portrait of him standing by the Bill Millin statue, taken in 2016 above Sword Beach, during a Taxi Charity  trip to Normandy for the D Day commemorations.”

“It was wonderful to spend the afternoon with Roy to celebrate his 100th birthday and we were delighted that the BBC joined the party to record the special celebrations. Roy is such a popular member of the Taxi Charity family and he has been with us on trips to Normandy and The Netherlands as well as on outings across the UK. My wife Susy who also volunteers for the charity and I presented the birthday boy with a framed 1922 Half Penny.”