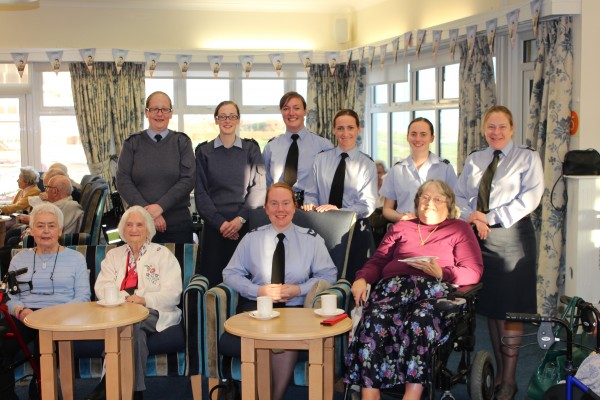 A team of seven female personnel from RAF Odiham joined former WAAF and WRAF members at a week-long celebration of 100 years of women in the RAF next week at Princess Marina House in Rustington.

The group gave a presentation to the former servicewomen at the care centre run by the RAF Benevolent Fund, before a special gala dinner on Wednesday. The evening was the highlight in a week of activities to celebrate 100 years of women in the Armed Forces, specifically the RAF.

Women began serving in the RAF towards the end of the First World War, when the Women’s Royal Air Force was formed in 1918. The Service was disbanded in 1920, following the end of hostilities.

When war broke out again in 1939, the Women’s Auxiliary Air Force was created with a limit to the roles women could apply for. In 1941, the height of the Second World War, women were conscripted into the service, which grew to more than 180,000 personnel at its peak. WAAF later became WRAF, before the two services, the RAF and WRAF were formally merged in 1994.

Ann Simons, a former WRAF nurse who served during the 1970s, said: “I totally enjoyed my time in the air force. I think this week is marvellous and I have already made a couple of friends.

“It is absolutely beautiful here, I love being by the sea. They treat you so well here.”

Sergeant Audrey Burleigh, who was part of the group from RAF Odiham, said: “We are delighted to be part of these celebrations and I am very much looking forward to meeting the WAAFs and WRAFs veterans. Many of the women served during the Second World War and were the trailblazers of their generation, paving the way for women, like me, who serve today. Indeed within the RAF all roles are now open to women and it is thanks to the determination of veterans like these WAAFs and WRAFs that we stand here today.”

General Manager Shirley Steeples said: “Personnel at RAF Odiham are wonderful supporters of Princess Marina House and the work we do here, so it seemed fitting they should join us in these celebrations. We are looking forward to a week of reminiscing about past service and also celebrating the contribution women have made throughout the past century.

“Of course our guests will enjoy a programme of events we have prepared, but I know what they’re most looking forward to is rekindling the companionship and comradeship they enjoyed as serving members of the WAAF and WRAF.”

Other events planned for the week, which runs until February 2, include talks, entertainment and visits to museums and other places of interest.

Princess Marina House is the RAF Benevolent Fund’s flagship care and respite centre on the West Sussex coast. Last year the Care Quality Commission rated the centre as outstanding, putting it in the top 2% of adult social care providers, nationally. The centre is funded by the RAF Benevolent Fund, the RAF’s leading welfare charity.