The wellbeing of Scotland’s Armed Forces children and young people was top of the agenda at a major conference at Dynamic Earth in Edinburgh last week.

The theme for the ‘Building Brighter Futures Together’ Conference was wellbeing of the child, not just for attainment, but inspiring positive destinations in Armed Forces children and young people.

“The needs of Armed Forces children and young people are often overlooked. Separation anxiety, ability to form attachments, a multitude of complex support needs at home, frequent moves can all impact on a child’s wellbeing and this is in addition to all the other pressures that young people face growing up in today’s society. This conference aims to put the wellbeing of our young people at the top of the agenda so we can galvanise the recognition and support that’s needed.” 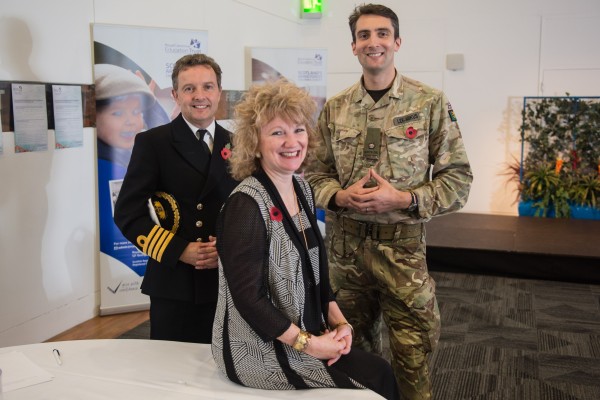 Keynote speaker, Dr Suzanne Zeedyk, a leading research scientist and developmental psychologist holding the post of Honorary Fellow at Dundee University, says the biological foundations of our capacity to relate to others emotionally throughout life, are formed in infancy.

“Babies brains develop very fast. They are born able to communicate and how they relate to people, and patterns in the way they trust significant others, are already formed by the time they are 18 months old. What happens during childhood builds on those foundations. This means our capacity to handle change, anxiety, loneliness, separation and our ability to develop effective coping strategies, are shaped by our experiences of being with others at a very young age.

“It makes such a difference when teachers can get curious about ‘challenging behaviour’ being exhibited in the classroom. I encourage them to change the wording to ‘distressed behaviour’, and to ask themselves how ordinary, normal practices in the classroom, which aren’t based in connection, might be making things worse for children who don’t have strong physiological systems for coping with their emotions.”

She added, “For families in the military whose lives are very transient, sometimes those weak foundations are not obvious until a soldier or submariner goes on deployment. People’s capacity to ask or look for help is different and we need to think creatively about the support systems being provided.”

Some schools are already adopting the science of connection to influence behaviour and increase wellbeing. Dr Zeedyk is currently working with pupils at Falkirk High School who have introduced laughter as an attainment strategy. At Burnside Primary, the head teacher welcomes pupils and parents at the school gates in the morning. “Two minutes of a greeting can change a child’s learning potential” says Zeedyk.

Delegates also heard how Scottish mental health charity, See Me, is helping young people understand the importance of good mental health in schools. Captain Rose from the Royal Navy revealed how the MOD’s Youth STEM Outreach programme is aiming to inspire our next generation in Scottish schools.

Britain’s Most Decorated Female Olympic Athlete of all time, the first woman to win medals at five successive Olympic games and the current Chair of UK Sport, Dame Katherine Grainger DBE, also drew on her experiences in the sporting world to highlight the importance of encouraging aspirations in young people.