You are here: Home / News / News / Wounded veterans are being trained in stage craft and story-telling in a unique scheme to inspire schoolchildren across the UK 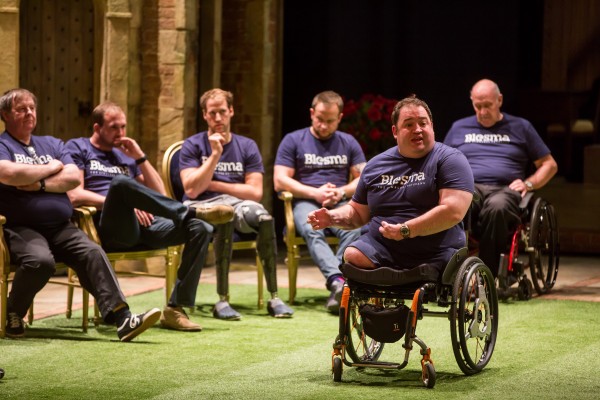 Military veterans including many amputees appear on stage in the West End.
All the 29 participants in the scheme, including triple amputees and wheelchair members, on stage at the Theatre Royal Haymarket….
Pictured: Warrant Officer Ken Bellringer, bomb disposal Royal Logistics Corps (wheelchair)

The former service personnel, many who lost limbs in the Afghanistan and Iraq conflicts, refined their public speaking skills with the help of leading theatre professionals.

They were taught delivery techniques and got to rehearse at the prestigious Theatre Royal Haymarket, London, to give added impact to their personal stories of trauma and redemption.

The scheme, organised by military charity Blesma, the Limbless Veterans, is entering its second year with the target of running workshops across the capital and nationwide for 7,000 children.

The project members, including two triple amputees who have rebuilt their lives after IED blasts in Afghanistan, had little or no experience of public speaking or telling their story.

“I wasn’t too sure what to expect as the theatre is not part of my world,” said former Parachute Regiment Lance Corporal Jordan Beecher. “When we first started speaking, it was like we were giving orders or a lesson in how to use a weapon. It was all very regimented.

“But the training has given us more confidence to take risks, be a bit more theatrical and make the stories more engaging.”

Jordan, from St. Albans, lost his lower left leg after stepping on an IED on his third tour of duty in Afghanistan in 2012. The 28-year-old, who has won four golds and a silver medal in rowing at the Invictus Games, had to rebuild his life and career after being discharged in February 2015.

“Being military, everyone skips over the bad bits of what happened and goes to the funny bits but they made us examine the bad times and what our feelings were. A lot of us pretend everything is ok: ‘Got blown up, learn to walk again, get a jog on’.

“This whole process has really helped me as well. It’s been a sort of therapy and I hope I can use my mistakes to steer people in the right direction. It is good to give back to people who need a bit more in their lives.”

The veterans, who range from 22 to 65, will be holding workshops from February to July.

Former Royal Anglian Regiment Corporal Billy Drinkwater, from Chingford, lost the sight in one eye and suffered deafness after an IED exploded while his unit cleared a compound in Nad-e Ali, Afghanistan in 2012.

He had to deal with a transformation from high functioning frontline soldier to needing help to cross the road and getting dressed.

“I’ve been independent all my life and that was really hard to get used to,” he says. “When the bomb went off I saw a big white flash and it felt like I flew through the air for miles. I lost the sight in my right eye and my left is badly damaged. I’ve lost my sense of smell and hearing in one ear. I knew I was in trouble but I remember being really hacked off because I knew my career was over.”

Billy, 34, has since becoming a qualified personal trainer, bought property and wants to learn project management so he can run a charity in the future.

“I’ve never done anything like this before but if telling my story can help people then I’m all over that,” he adds.

Barry Le Grys, Blesma CEO, adds: “The feedback from the pilot project was incredible from the youngsters, the teachers and the veterans. They have powerful stories about their struggles and we know that many children struggle with motivation and a sense of purpose during teen years.

“Their reaction shows that the programme can help them and provide a pathway to a better future.”

For schools wanting to book the workshops, contact: bcp@blesma.org